One of the most eagerly anticipated new cars for this model year is the 2021 Ford Mustang Mach-E, an all-electric four-door crossover with styling inspired by the Mustang. The name has admittedly cheesed off car fans, especially those of Ford’s legendary pony car, but it’s hard to argue with the marketing case for it. “Mustang Mach-E” has actually managed to get the attention of non-car fans, which is something that can’t be said for other electric cars not named Tesla. Reservations have been brisk, and Ford even increased the number of First Edition models it will sell to meet demand. It will arrive in dealers late in 2020 with the more powerful GT joining it late summer 2021.

You’ll find everything we currently know about the Mustang Mach-E below, but here’s a brief rundown of the details. It’s roughly the size of a compact SUV, but with a coupe-like roofline similar to a BMW X6. It has five choices of motor output, depending on trim level and whether it has all-wheel drive, as well as two battery pack sizes and 240-volt charger types. The most powerful version, the Mach-E GT, produces 459 horsepower and 612 pound-feet of torque, and will reportedly accelerate quicker than any regular Mustang not named GT500. It has plenty of futuristic cabin elements (hello 15.5-inch touchscreen!) but still maintains enough traditional controls and hardware to ease the transition into the future. Finally, its pricing starts at $43,995 not including the $7,500 federal tax credit or any potential state credits. It all amounts to a promising new electric car with a distinctively American performance flair.

There is absolutely nothing except the badge that says “Mustang” when inside the Mach-E. Nevertheless, its cabin does a good job of blending modern technology and a minimalist aesthetic with time-tested controls and a more traditional layout. The dash is dominated by a gigantic vertical screen that’s decidedly Tesla-like. We have yet to try it out, so we’ll reserve judgment for now, but we do like that there are still physical controls for audio volume, air vents, windows and lights. There is also a separate screen for the instruments in front of the driver. If that sounds like we’re comparing it favorably to a Tesla Model 3 or Y, you’d be correct. The center console offers plenty of storage, including a large space big enough for two phones, plus a covered bin under a flip-down armrest. We’ll have to drive a production version before knowing about the cabin’s quality. 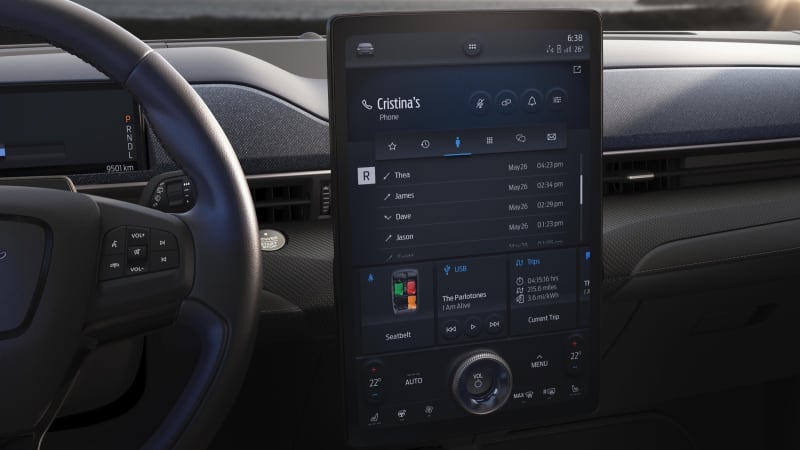 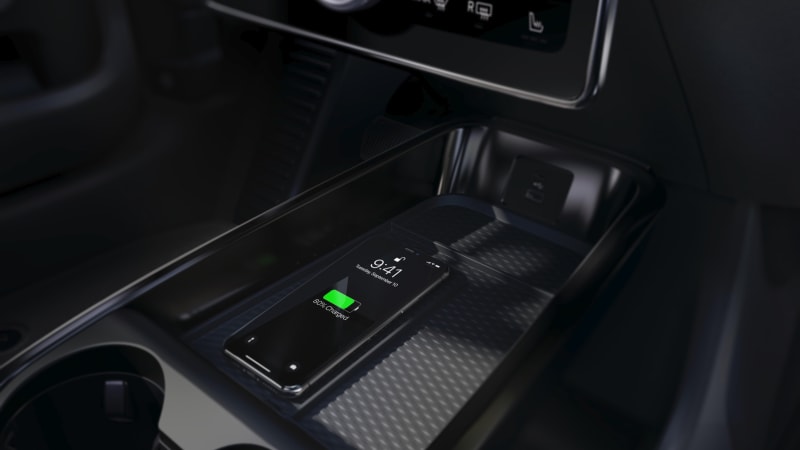 How big is the Mustang Mach-E?

In terms of length, it slots between Ford’s compact Escape and midsize Edge, but it’s a little closer to the latter. It’s considerably shorter than both in height, however, and its wheelbase is much longer. The result is unusual proportions that are a little bit crossover, a little bit car and definitely indicative of an electric vehicle that doesn’t need to adhere to the same packaging restrictions as a vehicle with an internal combustion engine. Still, its proportions and dimensions are much different than the Tesla Model Y, which is taller in height and shorter in wheelbase, as well as the less expensive Volkswagen ID.4 and Nissan Ariya. Those are closer to the Escape in size and shape.

So what does that mean inside? Well, the chopped “coupe-like” roofline means there’s less cargo volume than you’d find in a typical crossover. Its 29 cubic feet behind the back seat is less than what you’d find in compact crossovers like the Escape, but when compared to a sedan’s trunk, it’s pretty good, and certainly provides more versatility. There’s also a 4.8-cubic-foot “frunk” under the hood, which should be good for a small suitcase (or a lot of shrimp).

Despite the roofline, however, its 39.3 inches of rear headroom with the available fixed glass roof is similar to what you’d find in compact SUVs with normal rooflines. Its 38.1 inches of rear seat legroom is also comparable to compact SUVs. In other words, adults should have no problem fitting comfortably.

What are the performance and fuel economy?

Like the Mustang, the Mach-E offers a wide variety of powerplant options — it’s just that they consist of different electric motors and battery packs. The standard combination features a 75.7-kilowatt-hour battery and rear-wheel drive from a single permanent magnet electric motor. That combination offers 255 horsepower and 306 pound-feet of torque and a range of 230 miles. All-wheel drive adds a second motor, increasing torque to 429 lb-ft and reducing range to 210 miles. Ford notes that the dual-motor all-wheel-drive systems can quickly and dramatically adjust torque output front and rear for supposedly better handling, and probably better traction in inclement weather.

A long-range 98.8-kWh battery pack is available that, like the smaller one, uses a liquid system for temperature control. The bigger battery comes with more powerful motors, too. The rear-drive version comes with 282 horsepower and 306 lb-ft, and Ford says its EPA estimated range is “at least” 300 miles. The all-wheel-drive variant has an official 332 horsepower and 417 pound-feet of torque, and its range is 270 miles.

At the top of power heap are the Mustang Mach-E GT and GT Performance Edition. Both make 459 horsepower and 612 pound-feet of torque. Ford says the GT Performance Edition is aiming for a 0-to-60 time in the mid-3-second range. That would be quicker than every regular Mustang except the 760-horsepower GT500. Its estimated range is 235 miles.

Ford will offer two sets of 240-volt chargers with the Mustang Mach-E. The permanent home charger can add 32 miles per hour of charging, while the portable version can add 22 miles for each charging hour. The Mach-E has DC fast charging compatibility, and provided that the charger is rated at 150 kW, it can go from a 10% charge to 80% in 38 minutes, with the first 47 miles being added in 10 minutes. Last and least, there’s also a 120-volt mobile charger that gets you 3 miles of charge per hour.

We have yet to drive the Mach-E.

What features are available and what’s the price?

Pricing starts at $43,995 for the base Mach-E Select with rear-wheel drive and the standard battery. That includes the $1,100 destination charge, but not the $7,500 federal tax credit and any potential state EV credits. The visual differences between all the trim levels can be seen in the gallery above.

The California Route 1 trim comes standard with the more powerful battery, a panoramic fixed glass roof, unique exterior trim, a 360-degree parking camera and the “Active Drive Assist Prep Kit” that outfits the car with the hardware that will be needed once the software for a more comprehensive driver assistance suite is ready.

Besides its performance upgrade and standard all-wheel drive, the GT gets 20-inch wheels, unique exterior flourishes and ActiveX upholstery, a 10-speaker B&O sound system, and all the Premium’s upgrades.

Besides performance/battery upgrades, only the Select is eligible for traditional options that are restricted to Comfort/Appearance and Comfort/Technology packages.

What are Mach-E’s safety equipment and crash ratings?

The Mach-E has not yet been crash tested by a third party.