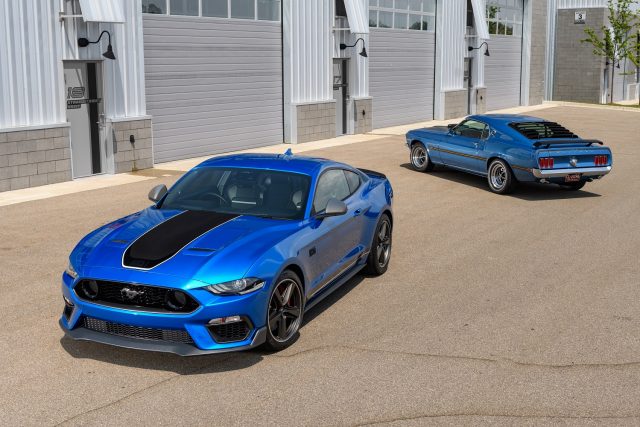 SEVENTY three years ago today, over Rogers Dry Lake in Southern California, the world flew faster than ever before with the first ever sound barrier breaking flight. Mission accomplished, Mach 1 was achieved.

Seventy three years later, the thirst for speed is quenched again. The Ford Mustang Mach 1 has returned as a truly global model, and will join the line-up in Australia for the first time in 2021.

“That spirit and determination to keep pushing, never settling and always trying to go further is what the Mach 1 Mustang was all about, and it’s fitting that we can bring Australian customers, who’ve made Mustang part of our motoring landscape, a 2021 Mustang Mach 1 of their very own.”

The iconic Mach 1 model, which first first appeared in North America in 1969, will be offered in Australia and New Zealand in 2021, with a limited run of 700 cars. It will also be the first factory right hand drive produced at the legendary Flat Rock (Michigan) plant.

“It’s a stunning looking vehicle, but above all it really is a Mustang made for enthusiasts, it is all about how it drives around a track, which is why I’m so pleased to be working on this project with Ford,” Supercars driver and Mustang Mach 1 ambassador Rick Kelly said.

“Racing a Mustang Supercar around tracks like Mount Panorama, where we’ll be this weekend, has been a highlight of 2020 for me, but Mach 1 is such a unique opportunity for fans and customers, so I am pumped for its arrival here next year.”

Since its arrival in Australia in 2015, the Ford Mustang has become the best selling sports car in Australia, and has seen a passionate customer base for special edition models, including Mustang BULLITT and the supercharged Mustang R-SPEC.

The Mach 1 will be offered alongside the Mustang 2.3-litre High Performance and Mustang GT in 2021, with Australian specification and pricing to be announced closer to launch.