The Cadillac Escalade is one of the most recognizable cars in America, both on the road and in the minds of consumers. It is equal parts profit machine and pop culture icon, and it sits atop GM’s heavy-hitting hierarchy of body-on-frame SUVs.

Sure, Cadillac may hold most of the cards in the luxury SUV marketing game, but it’s not the only player. For starters, the Lincoln Navigator is quite good, and it takes a very similar approach to truck-based luxury. Both are flashy, cushy and high-tech, and their tuning acknowledges that driving dynamics will never be the strong suit of vehicles this large – though ride comfort certainly can be. To make matters worse, the Europeans are getting serious about their three-row SUV game, and while they may not offer the same body-on-frame capability you get from the Americans, they more than make up for it with brand prestige and state-of-the-art engineering.

With such solid competition, Cadillac was not in a position to just phone in the Escalade’s redesign. The highlight of that effort is a new platform, shared with the new Chevrolet Tahoe and GMC Yukon, that finally features an independent rear suspension. There’s also the gorgeous and tech-rich interior featuring a 38-inch curved OLED dash screen, a new diesel engine option and – stop us if you’ve heard this one before – Super Cruise.

While the Escalade does share its fundamentals with the Tahoe and Yukon, the Cadillac-branded variant of GM’s big truck platform always gets special treatment. Only the very base model is available without a leather interior, for example, and the aforementioned in-cabin tech is exclusive to the Escalade. You’re also limited to just two engine options: the standard 420-horsepower V8 that’s the range-topping option on GM’s other SUVs, and the new  3.0-liter Duramax turbodiesel inline-six that’s good for 277 hp and a V8-matching 460 pound-feet of torque. Both are paired with GM’s 10-speed automatic transmission, and there’s no price difference, regardless of trim. 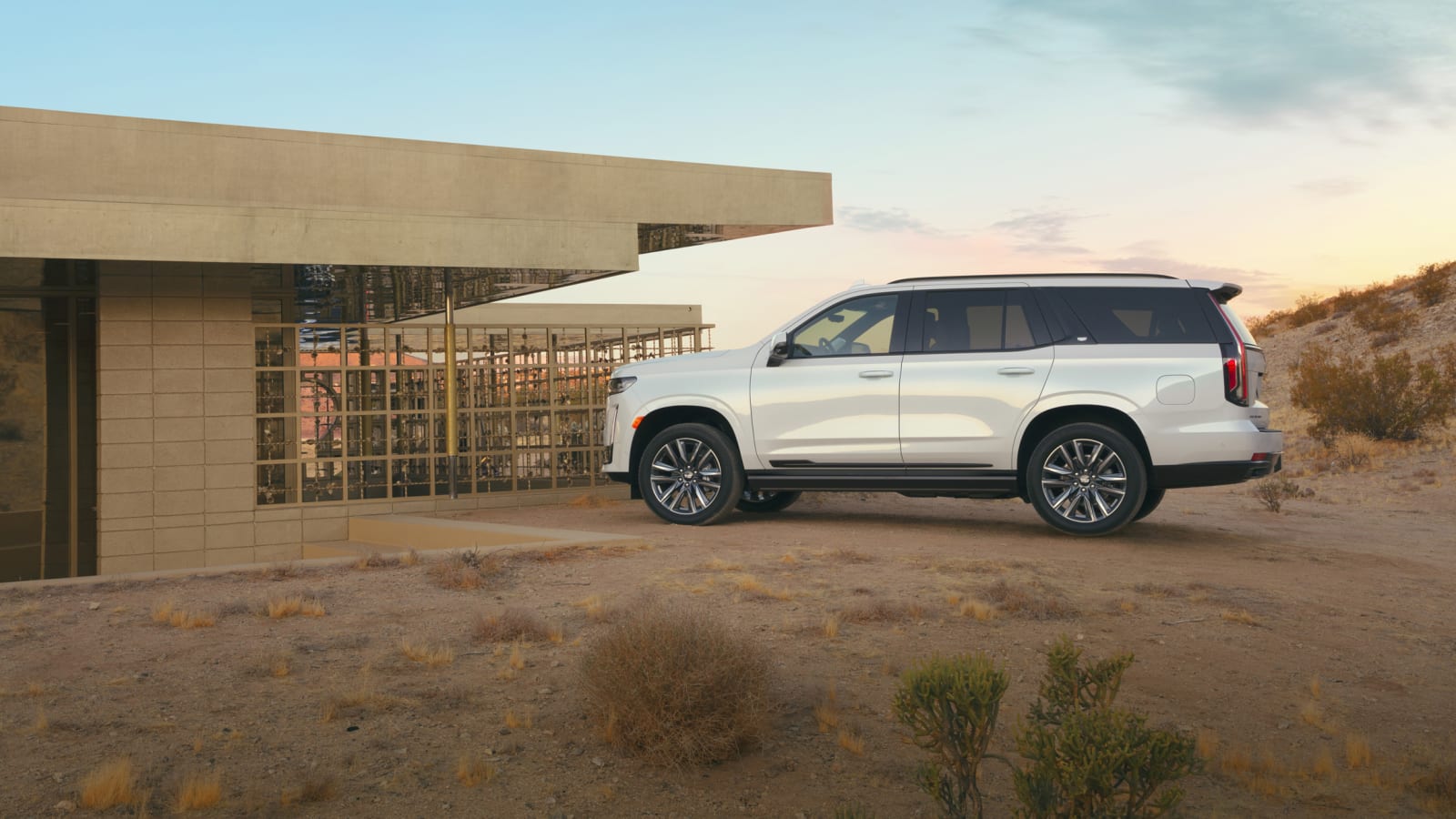 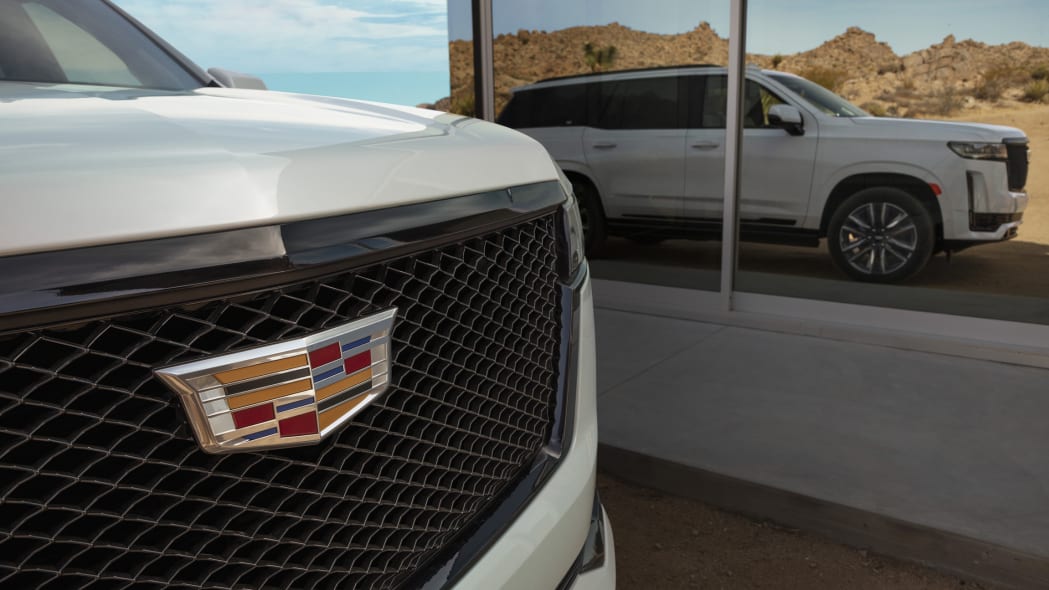 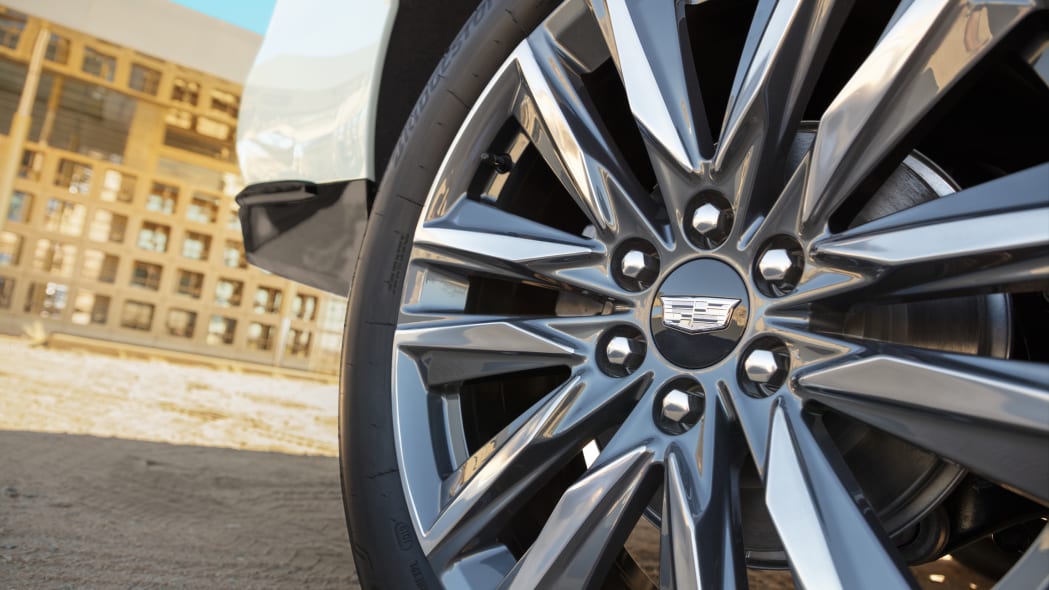 Like Cadillac’s other offerings, the 2021 Escalade has a split trim hierarchy. Above the base model, you can choose one of two paths: Premium or Sport. The Premium Luxury and Premium Luxury Platinum are your more traditional, flashier options, with lots of chrome and a rich, warm interior. The Sport and Sport Platinum are for those who prefer a more modern, subtle aesthetic, with blackout exterior trim and more subdued interior finishes.

While Sport line models do benefit from a limited-slip rear differential (it’s included with the towing package that is baked into Sport models), there are no deliberate chassis or powertrain tuning differences between Sport and Premium Luxury.

Our loaner was a 4WD Sport Platinum with a couple of minor options: retractable running boards and a night vision display, but that’s underselling it a bit. Since Super Cruise is not yet available, this example was pretty close to loaded. At this level, you get an air ride suspension with Magnetic Ride Control, wireless Android Auto and Apple CarPlay, Cadillac’s new AKG 36(!)-speaker audio system, 16-way massaging front seats, and leather on all three rows with a suede headliner overhead. Cadillac says a loaded 2021 Escalade tops out at around $115,000. Ours? $110,565 with the $1,295 destination fee included – a good bit more than the roughly $79,000 base price.

No, that’s not cheap. In fact, the Navigator struggles to cross into six-figure territory even when loaded to the absolute gills. Keep in mind too that the long-wheelbase Escalade ESV variants run about $3,000 more expensive across the board, and Super Cruise won’t be free once it becomes available. The Navigator also has the edge in a few key metrics, including third-row space, horsepower and torque (450 hp and 560 lb-ft) and ultimate towing capability. The Escalade’s edge comes from its available air suspension, which allows Caddy’s product team to get away with big, blingy wheels and thin sidewalls without severely compromising the Escalade’s ride. And, man, what a ride it is. 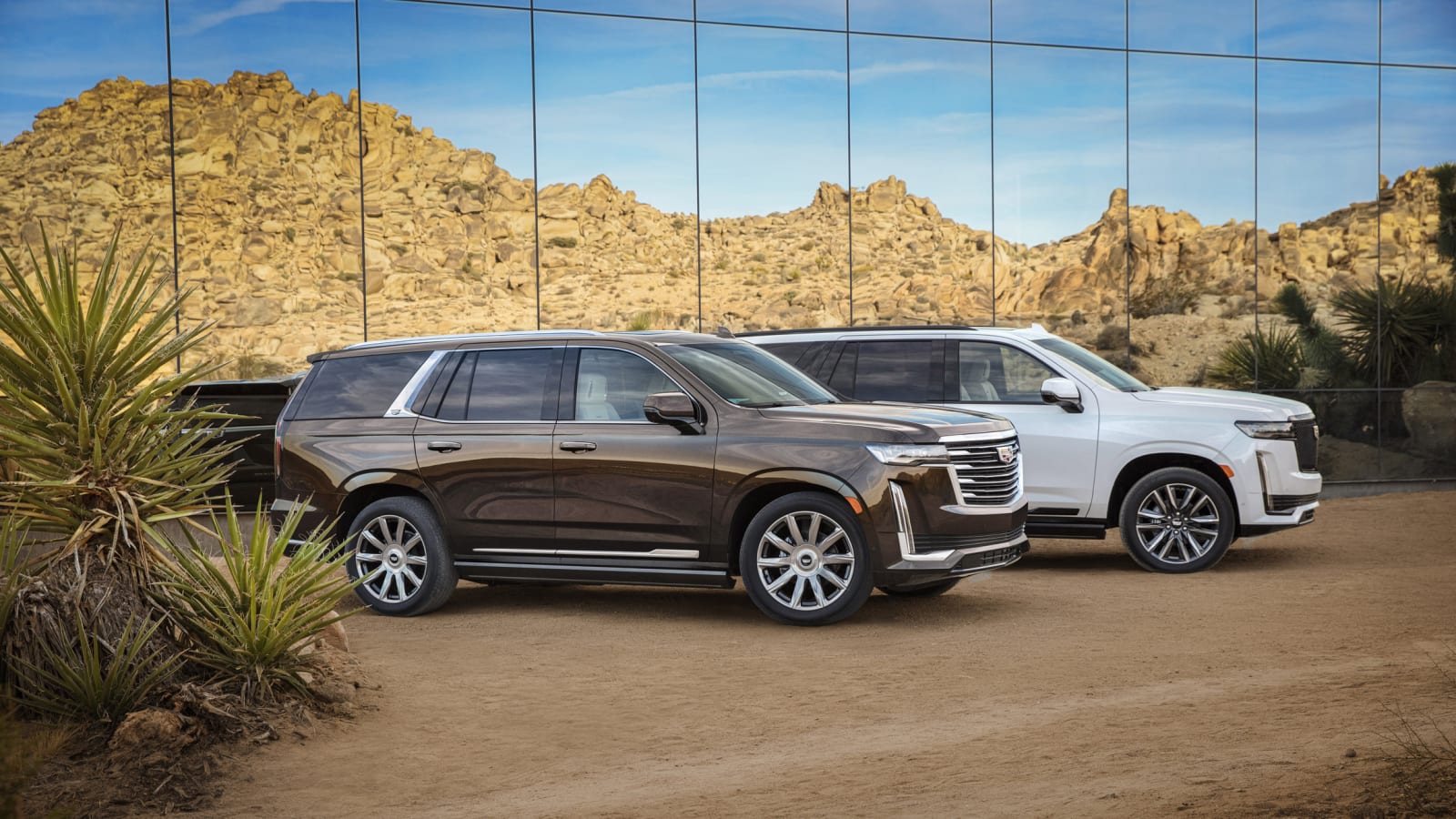 Stepping in alone might make your ears pop, and the sensation of driving one down the highway is dramatically different than what you get even from one of those big three-row Europeans. Unless you spend a lot of time in full-size pickups and SUVs, it takes some getting used to. Make no mistake, the Escalade is not the kind of vehicle that “shrinks” around the driver once you get in motion. It has quite a bit of road presence, even from the inside, but it’s not in any way intimidating. In fact, it’s a very approachable drive.

The 6.2-liter V8 remains a gem of an engine. It’s powerful and flexible, and the 10-speed makes great use of its strengths. It’s hardly fuel efficient, though. Over the course of our 58-mile test loop, we averaged just under 16 mpg, which pretty much confirms the EPA’s ratings of 14 mpg in the city, 19 mpg on the highway and 16 combined. The latter is 2 mpg worse than the more powerful Navigator, a number that amounts to many hundreds of dollars in annual fuel costs. We would have liked to spend some time with the new diesel engine for comparison, but both it and the Super Cruise option are coming later this year, so that will have to wait, but based on the EPA figures for GM’s full-size pickups with the same engine, we’d expect somewhere in the neighborhood of low 20s combined from the oil-burner.

As delightful as the Escalade’s powertrain is, that’s not its stand-out feature; that honor goes to the suspension. All but the base model Escalade can be equipped with Cadillac’s fourth-generation Magnetic Ride Control. Air suspension requires a Platinum model (Sport or Premium Luxury; choose your own adventure). The combination of the two is exquisite, and it’s only over particularly bad pavement that the 22-inch wheels and body-on-frame construction combine to remind you that independent rear suspension alone is not a cure-all for the shortcomings of a truck chassis.

There are other nontrivial benefits to the Escalade’s new rear suspension packaging. The big one is third-row legroom, which is up by 10 inches (24.8 inches to 34.9 inches) from the 2020 model even in the standard-wheelbase Escalade. This is still short of the Navigator’s 42.3 inches of rear legroom, but someone of even average height can actually sit back there now . There’s also 25.5 cubic feet of cargo space behind the third row in the Escalade – up from 15.2 cubes and beating the standard Navigator’s 19.3. But comfort and performance alone do not a luxury car make. It’s the smaller touches – both tangible and intangible – that can make or break a premium offering, and Cadillac took that to heart, especially in the Escalade’s cabin. 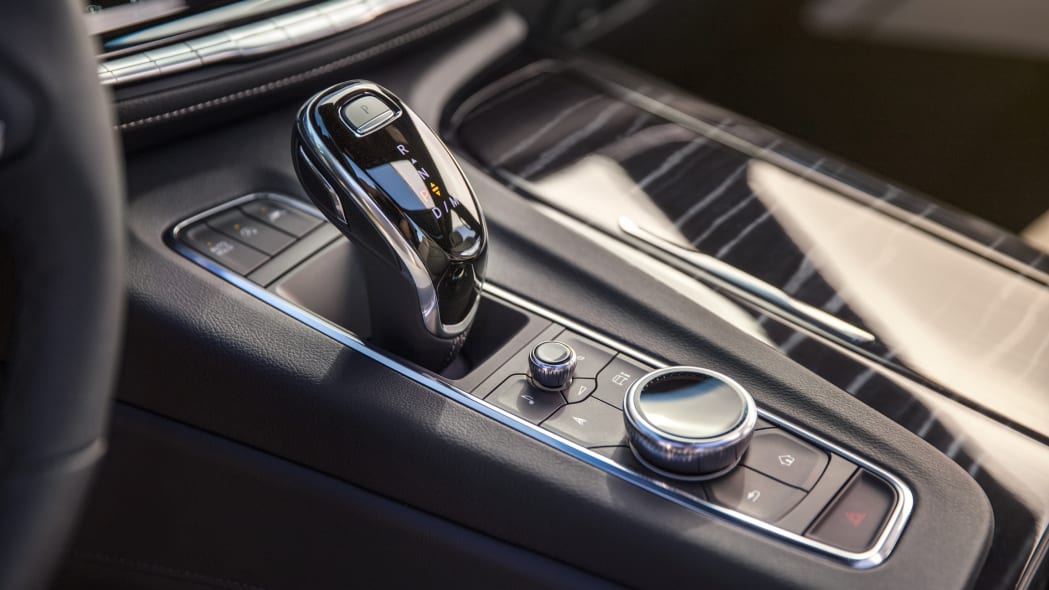 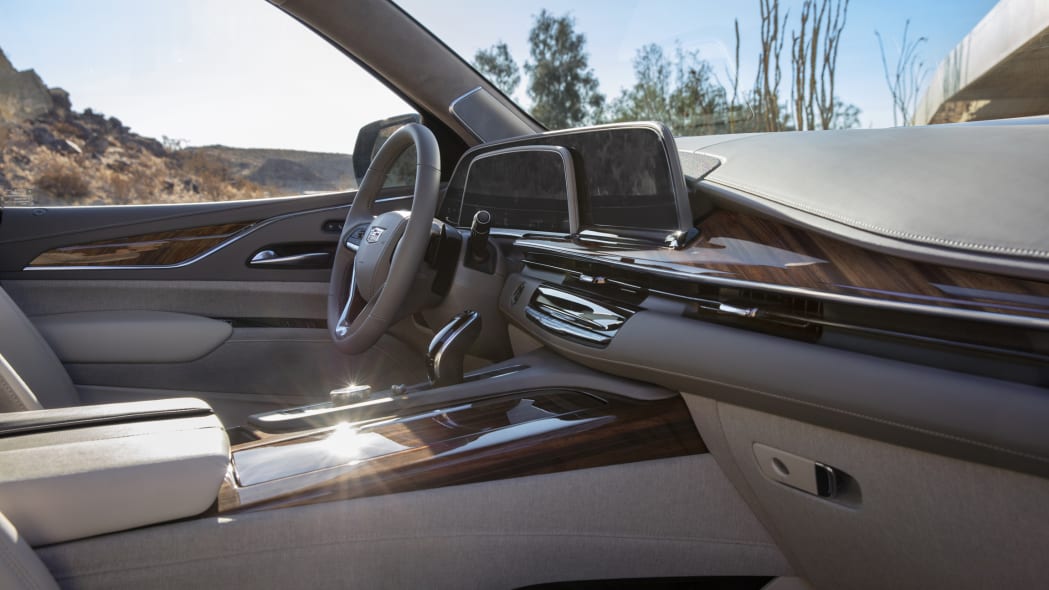 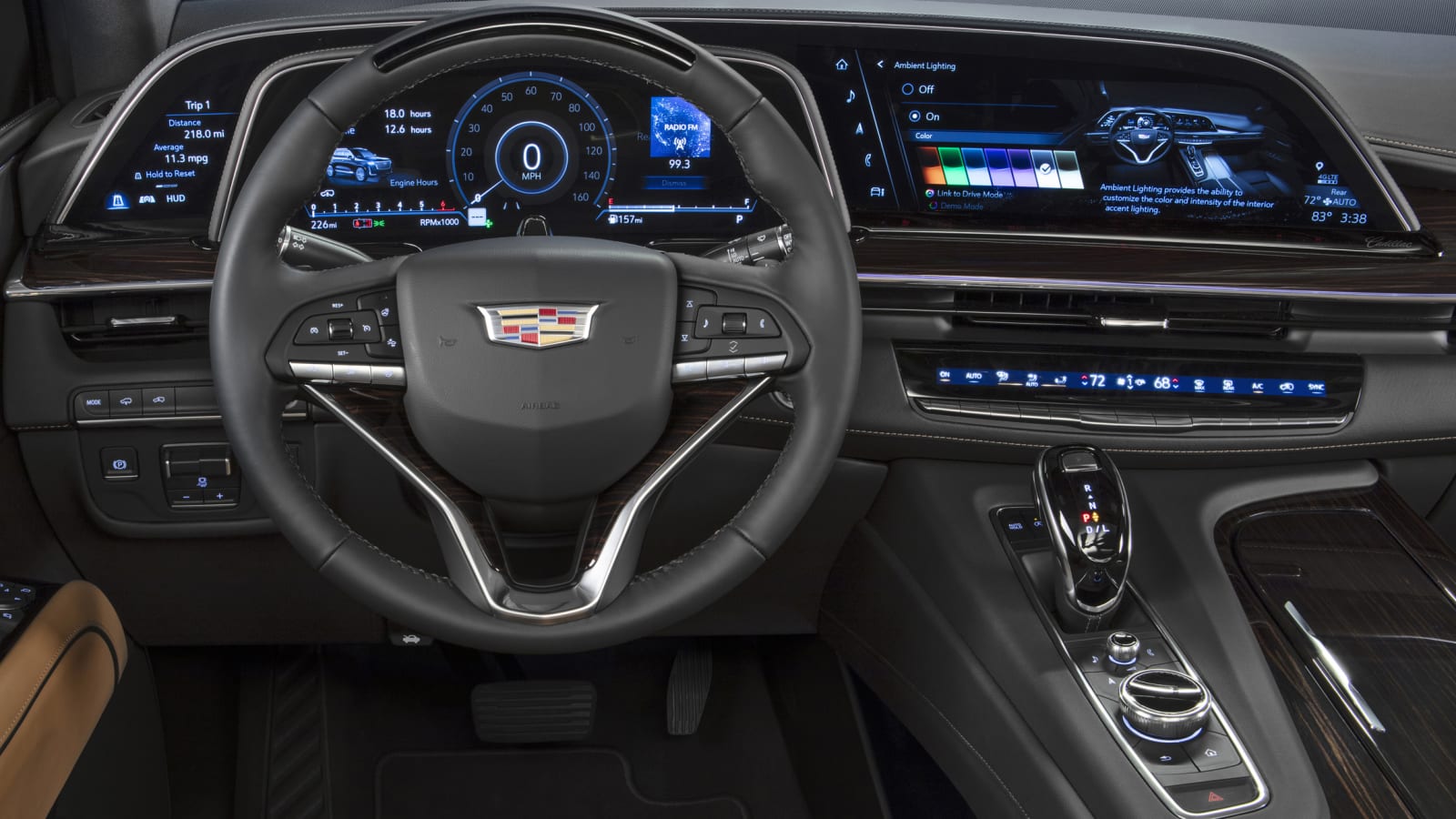 The digital dash is a work of art, frankly, and it’s backed by solid hardware to boot. It boasts instantaneous response to inputs, and the infotainment system is smooth and intuitive. Your author jumped into the Escalade without any sort of primer and was able to get completely acclimated to the experience in 10 or 15 minutes behind the wheel. Good luck doing that in a Mercedes. The only real learning curve is a side effect of the Escalade’s massive square footage of digital real estate.

For example, the display on the left side of the instrument cluster requires a bit of mental re-programming. In most cars, this area is usually occupied by miscellaneous functional controls, like headlight toggles or dimmer knobs. Most of those are present here, but they’re accompanied by an additional driver information display, which allowed Cadillac to de-clutter the gauges a bit. It’s attractive, clean, and functional. Our only gripe is with the drive mode toggles, which are represented by individual buttons underneath this display, rather than a single knob, which would have been more elegant.

We were also quite impressed by the upgraded AKG audio system in our test car. While a 19-speaker AKG system is standard, the 36-speaker variant we sampled is quite an experience. AKG is new to car audio, but like many fixtures of the industry, it is owned by Harman Kardon, which knows its way around an automotive cabin. We only had time to listen from the driver’s seat, but we came away impressed, even listening to satellite radio, which is known for low-quality audio streams. The system has crisp highs and punchy lows; the latter are perceptible through the pedals even at low volumes.

Where Cadillac’s XT6 disappoints, the Escalade shines. The bigger truck feels more luxurious, more premium, like more of an occasion. It feels like a Cadillac. Big-boned luxury may not be for everybody, and for that reason the XT6 and its crossover competitors exist. But for those who like a nice blend of comfort, practicality and ostentation, it’s really hard to argue against Cadillac’s flagship.

Hyundai, Kia warn of $2.9B earnings hit over engine issues