You really need to climb into this SUV, as is the case with most ladder-frame SUVs, but to make things a bit easier, the powered driver’s seat automatically slides all the way back on unlocking the vehicle. And just like the exteriors, the Gloster’s cabin is dressed to impress. There’s a generous usage of double-stitched tan leather on the dashboard, door pads, and seats, which make a great first impression. Quilting on the seats and brushed aluminium trims further uplift the premium experience. The dashboard design strikes an uncanny resemblance to any modern BMW, more so in the way the 12.3-inch trapezoidal touchscreen is placed and styled. However, this isn’t something that MG buyers will complain about. The instrument cluster features an 8.0-inch colour screen between the dials that is crisp, fluid and full of relevant information. In fact, this screen overshadows the ordinary looking analogue tachometer and speedometer relegated to the sides of the binnacle. Apart from the usual trip and fuel computer info, it can show you drive modes, ADAS functionality (more on this later), tyre pressure, media and phone info, and much more. 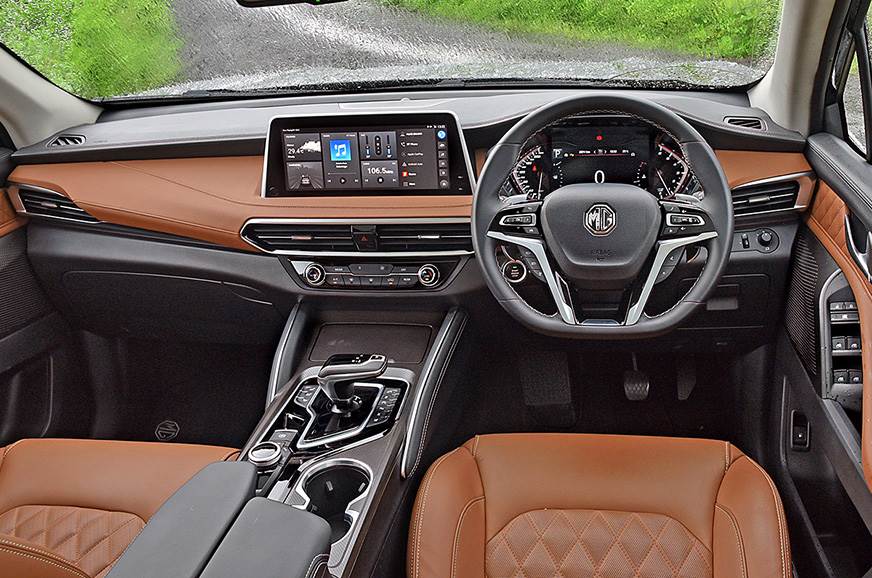 While perceived quality is generally pretty good, when you take a closer look you realise that some of the materials and plastics used don’t feel premium enough for a car of this price. Even the switchgear on and around the button-heavy steering wheel feels a bit low-rent and you’ll find yourself accidentally hitting the one with the * on it regularly, resulting in a call back from MG’s prompt and patient helpline. Attention to detail is missing in the key fob too – it has no proper markings, which makes pressing the right button a bit of guesswork, especially in the dark. 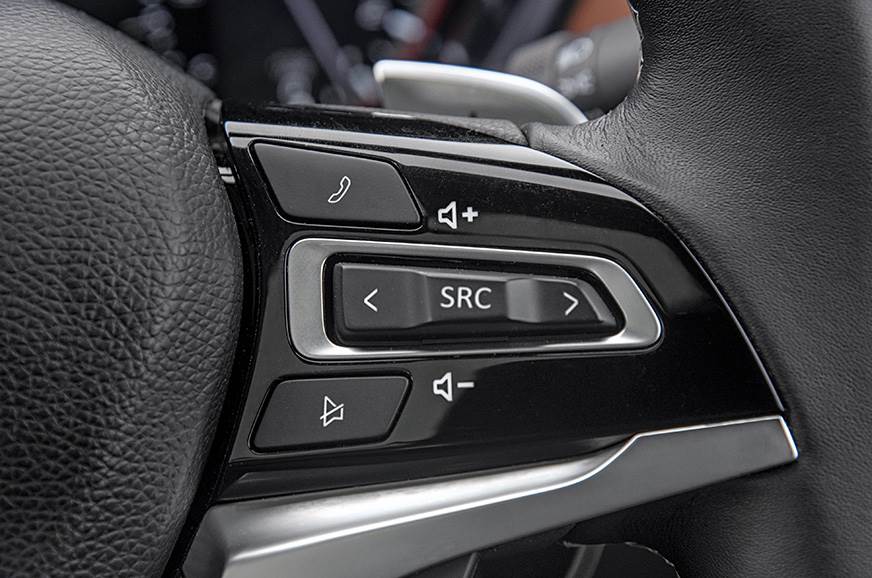 Plasticky steering-mounted control buttons feel low rent and are fiddly to use while on the move.

The front seats are wide and generous, offering a plethora of adjustments, with the driver’s side being powered with memory functions, as well as heating/cooling and massage function, while the passenger’s seat has to make-do with only a heating function. 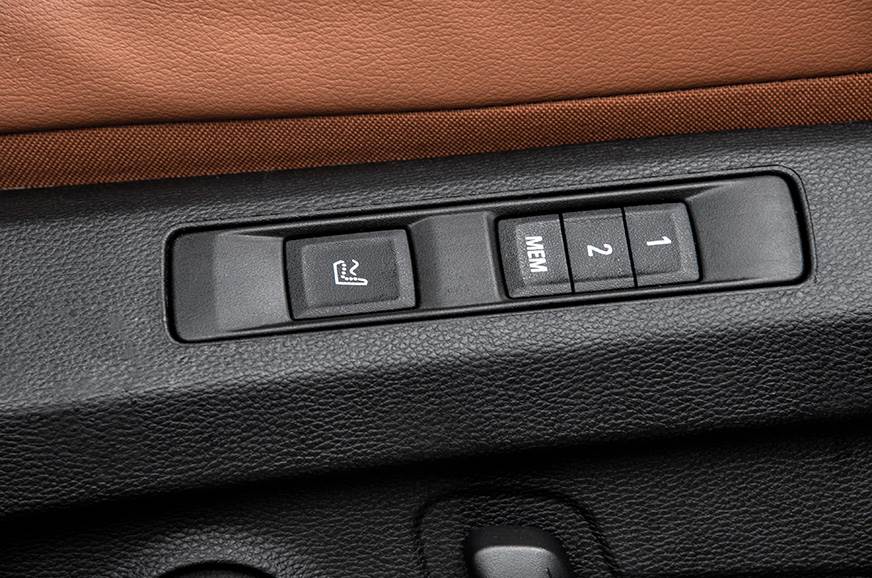 Powered driver’s seat gets both memory and massage functions.

But as you try to settle in for a long drive, you’ll notice the lumbar support, even at its lowest setting, is a bit excessive, and the cushioning all round is stiff and hard. The massage, as a result, feels more like physiotherapy than relaxation. 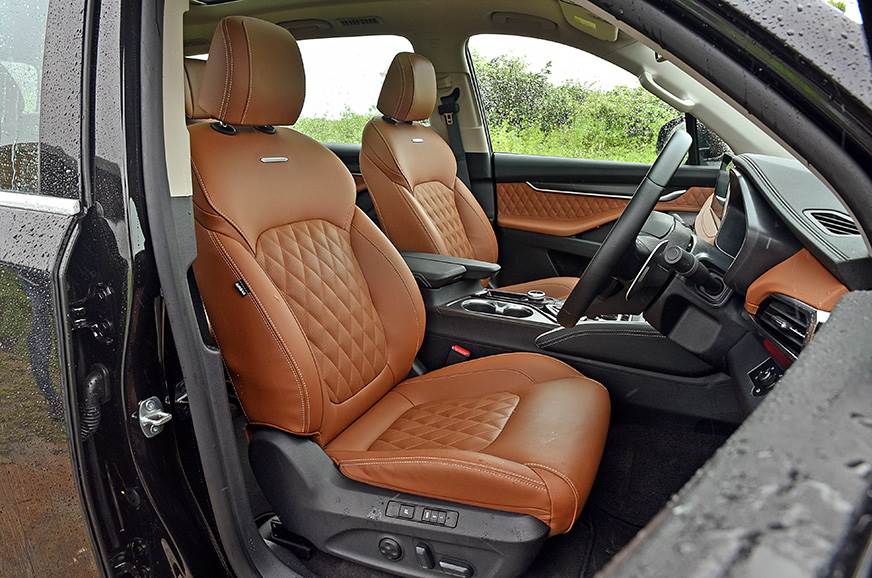 Excessive lumbar support and firm cushioning takes away some comfort.

Still, even with the seat motored down to its lowest setting, forward visibility is great, thanks to upright A-pillars and a relatively low-set dash. Even the giant wing mirrors have enough of a gap from the Gloster’s body so as to not cause a huge blind spot. Rear visibility, however, is hampered by the big head restraints on the rear seats.

This top-spec Savvy variant is equipped with a pair of captain’s chairs in the second row, which are almost as generous in size as the ones in front. They can be reclined a fair bit and have a long range of fore-and-aft sliding travel, allowing for limousine legroom. For those who are largely chauffeur-driven, the combination of captain’s seats and overall space on offer makes the Gloster’s middle row very comfortable. But again, like the front seats, the second-row pair feel noticeably hard and you don’t quite sink into them. Some lower variants offer a bench seat in the middle row. 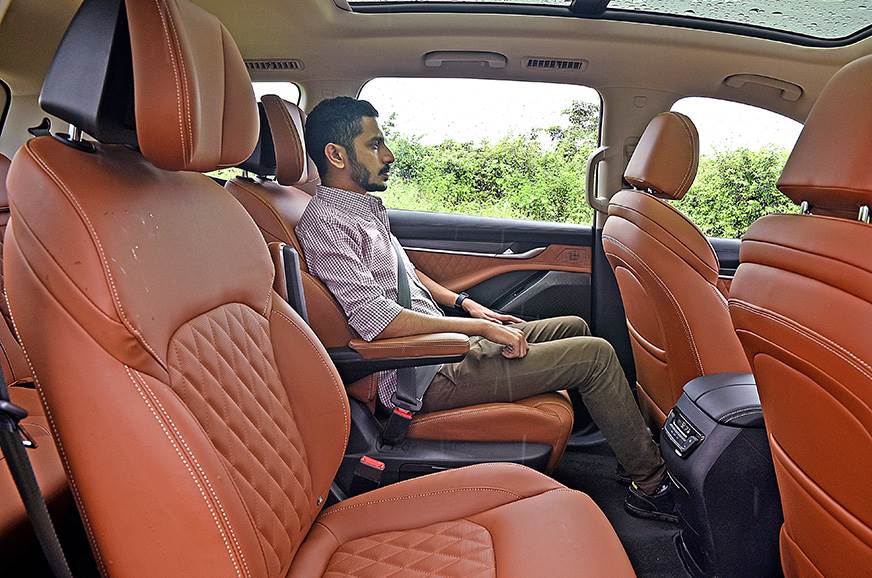 Captain’s seats with ample space make it an ideal SUV to be chauffeured in.

In terms of practicality, hidden in the seat bases are cupholders and storage for tablet computers; you get a third climate zone for the rear cabin, and of course, some charging provisions, as well as storage in the door bins and front seatback pockets. Window sunshades, however, are sorely missed.

Tilting and sliding the second row forward does allow you decent access to the last row, but it’s perhaps easier to just walk between the middle-row seats. When it comes to outright space, just like with the middle row, this is easily the best third row among SUVs in this segment, and perhaps even among larger, full-size luxury SUVs. You sit a bit low, thigh support isn’t great, and there’s no place to tuck your feet (which is all par for the course), but headroom is decent and knee room – with the second row in its mid-way position – is so good, you’ll forgive it for its shortcomings. The large (fixed) glass area here, too, allows a lot of light through, further adding to the sense of space. 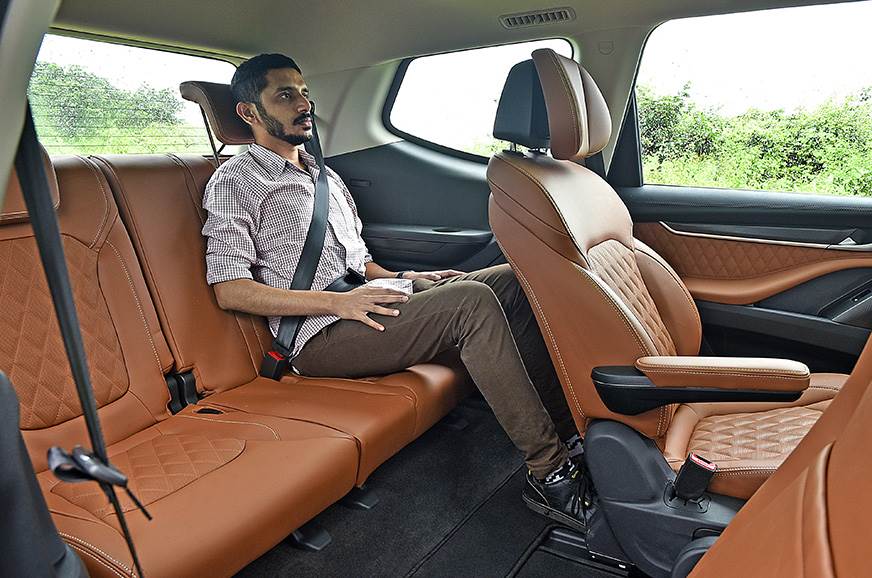 Impressive space in the third-row seat and large windows create an airy feel.

You get cupholders, USB and 12V charging, and dedicated AC vents back here, and though it’s comfortably wide enough for three kids, MG has given it just two seatbelts and head restraints.

With all that cabin room, it’s understandable that there’s not a lot of space for luggage with all rows up; but again, it’s more than what the competition offers, and you can fit a couple of strollers and soft bags. Flip the third row down, though, and space is vast. You even get a powered tailgate with hands-free opening, and a retractable luggage cover that stows away under the boot floor. 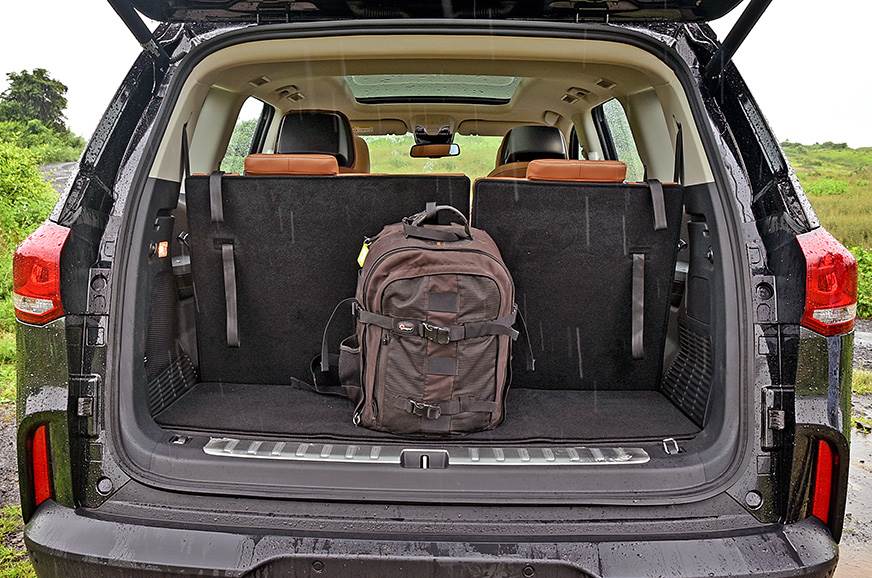 There’s enough space here for a couple of strollers and some soft bag.

All told, the Gloster is by far the most spacious SUV in its class; what amplifies the sense of space here is the enormous panoramic sunroof, which has become an MG signature.