BangShift.com Classic YouTube: Watch As This Six-Second Camaro Gets Loose And Goes Spinning At Calder Park

Classic YouTube: Watch As This Six-Second Camaro Gets Loose And Goes Spinning At Calder Park 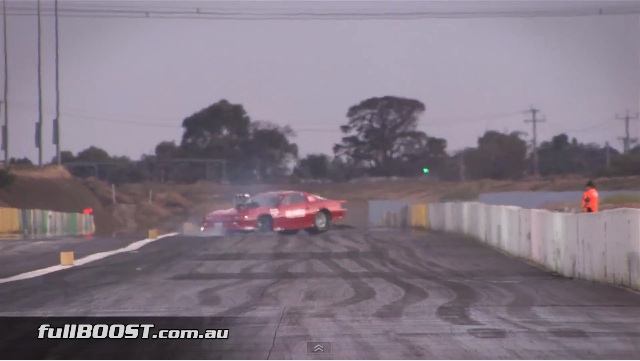 Drag cars do not like going sideways at speed. Drag cars do not like doing donuts at speed…rather, at all. If a drag car gets too far sideways, there is a damn good chance that the tires will dig in and the car will roll, or that the driver won’t get the car caught up before it smacks the wall. We’d be inclined to agree, except in two cases: the incredible save we saw at SCSN earlier this year, and this guy: Spud Racing’s third-generation Camaro, which was competing at Calder Park’s FAST Friday. Shortly after launch the car gets out of the groove and heads for the centerline, and when the driver tries to correct the Camaro decides that instead of a race car, it wants to be a pretty, pretty ballerina and spins. The driver pulls the same trick the Mustang driver at SCSN did: by nailing the throttle at just the right time in the middle of the spin, he kept the Camaro from kissing the concrete and left unscathed, with the only damage being slightly flat-spotted tires and ruined shorts. Good save, mate!