In what’s probably one of the biggest understatements of all time, things weren’t normal this year in the car world or anywhere. Car shows went out the window, as did press drives across the country and the world. But all the weirdness makes us all the more thankful for what we did get. The car news kept coming, some of it extremely exciting, like a new Bronco, an electric Hummer and much more. And we still got to drive cars and bring you along for the rides. And in keeping with the spirit of the week, we wanted to share the cars we were most thankful to take for a spin this year.

Associate Editor Byron Hurd: This one’s a no-brainer for me. My nod goes to the Ford Mustang Shelby GT350. I drove some cars that were objectively superior and some that were far more significant to the marketplace, but none that felt quite this special. 2020 was the final model year for the GT350, which gives way in 2021 to the revived Mach 1. Getting a chance to sample this gem of a pony car in its sunset year was a rare privilege, and I would encourage you to do the same should the opportunity arise.

West Coast Editor James Riswick: This choice isn’t so much the car, but where I drove it. When looking for a suitable drive route and story for the Porsche 718 GT4, I decided on driving from Portland to Detroit … Oregon. It would make for a fun headline and I had read that the scenic route to the little lake-side town of Detroit through the Mt. Hood National Forest was one of the best driving roads in the state. It was indeed and although I didn’t stay long, the town was cute and I looked forward to coming back. Four months later, the town of Detroit was reduced to ashes. So too was much of the forest you see in the photos above. This is what Detroit looks like now. I’m grateful I got to make that drive in an appropriately brilliant car when I did.

Road Test Editor Zac Palmer: I never had the privilege of driving a Lotus before 2020. Boy was I missing out. The tiny British company out of Hethel knows what it’s doing. Lotus cars are rare. Not many are sold, and there are so few models that we don’t often get to drive new ones. So, thank you to Lotus for coming out with the Evora GT this year. I can’t compare this iteration to the Evoras that came before it, but I know for a fact that the Evora GT is utterly brilliant.

In a sports car world full of high-tech gizmos and electronic doodads, the Evora GT is a deep breath of fresh air. Many of us get into the car hobby because we love the act of driving. Electronics and tech can sometimes detract from the simplistic connection between the driver and the car. However, new car tech can also make the drive more enjoyable, assuming it’s applied with purpose and in pursuit of a better driving experience. The Evora is the best example of a sprinkling of new car technology being applied to enhance an old-school driving experience.

From a driver’s perspective, I had more fun driving the Evora GT than I did any other car this year. And yes, that list includes the new 2020 Corvette and a number of Porsche 911s. The Lotus is a reminder that even though manufacturers’ electrics do an incredible job of tricking our brains, there are still no replacements for things like hydraulic steering, real exhaust noise and a sublime manual transmission. Driving the Evora GT is like hitting a reset button. It’s the closest you can get to pure driving nirvana in 2020. And for the opportunity to experience that, I am very, very thankful.

News Editor Joel Stocksdale: If you’ve been reading Autoblog for a few years now, you may have picked up on the hint that I have a soft spot for the VW Beetle, and a big part of that is because of my lifelong love of, well, The Love Bug‘s Herbie, a 1963 Beetle. And this year I got about as close to driving that car as I’ve ever been when Volkswagen sent out its 1964 model from its collection for me to take for a spin. Fortunately, it was a good hero to meet, showcasing how charming such a simple little car could be. To be completely honest, I think I prefer the handling and power of later Super Beetles like the convertible I drove in L.A. last year, but the ’64 was quite a bit of fun. And of course, the timing was superb since I had just recently purchased a 2013 Beetle Turbo of my own that I could compare it with. So I’m really thankful that I got to fulfill a couple dreams of mine this year: driving a hero car, and buying its descendant. 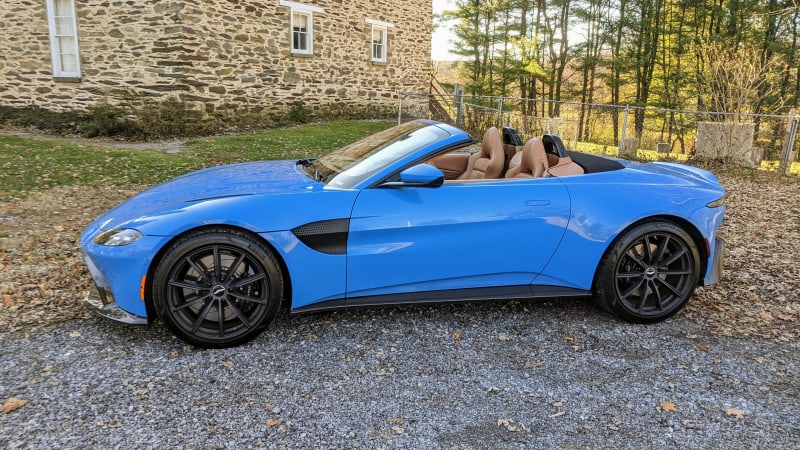 Contributing Editor Joe Lorio: I was fortunate to drive some very cool and interesting cars this year. One that stands out in particular was the Aston Martin Vantage Roadster. This bright-blue beauty is a sight to behold and with its Connolly leather interior, is an olfactory delight as well. Its 503-hp 4.0-liter twin-turbo V8, courtesy of Mercedes-AMG, delivers serious, silken thrust. And the chassis felt ideally tuned for a blast up New York’s Taconic State Parkway into rural eastern Dutchess County. The fact that it was just warm enough for top-down travel was an additional tonic, as a long afternoon behind the wheel of the Vantage proved to be a perfect escape from the national news in the tense days of early November. Aston, take me away.

Senior Editor, Green, John Beltz Snyder: It was a rewarding year, but it always is when your job involves driving a multitude of cars. There were some memorable ones in 2020: the Chevy Corvette Convertible, Bentley Flying Spur, Genesis G80 and a 1967 VW Samba Bus, among others. The car I’m truly thankful I drove, though, is the Polestar 2. I liked it even better than the more exclusive Polestar 1. It’s not everyone’s cup of tea — especially Tesla diehards’ — but it sure is mine. I like the design, the materials, the unique flourishes sprinkled throughout and, of course, the performance from the electric powertrain. This muscular EV is a beast with a straightaway in front of it, and just as competent carving corners. On top of that, it uses the new Android Automotive Operating System, which makes the infotainment system both smart and easy to use. The Polestar 2 is fresh thinking embodied in car form, and I can’t wait to drive it again.

Consumer Editor Jeremy Korzeniewski: The two most memorable vehicles I drove over the last 11 months were both factory off-roaders from FCA: The Jeep Gladiator Mojave and the Ram 1500 TRX. Both are a blast to drive across rugged terrain at speeds that would cause weaker vehicles to crumble or spiral out of control. I’m going to focus specifically on the TRX for this story, but for a completely different reason. As I suggested in our First Drive writeup, it’s hard to imagine how to move the needle any further than it already has, but really that’s overlooking one important development: batteries. Because as awesome as 702 horsepower is (and it really is very awesome), to me personally — and your mileage will obviously vary, literally and figuratively — a dozen miles per gallon isn’t just abysmal, it’s irresponsible.

And so I’m really looking forward to the upcoming electrification of the pickup truck, from the likes of Ford, Hummer, Rivian and Tesla (though I’ll admit to being worried that some of these trucks will be delayed). How long will it take for Ford to electrify a Raptor? I don’t know, but I can’t wait to find out.