“With HTWO, Hyundai Motor Group is stepping up efforts for the development of a next-generation hydrogen fuel cell system that can be applied to various forms of mobility such as UAM, automobiles, vessels and trains,” Hyundai said in an announcement late Thursday.

“Not only will the next-generation fuel cell system be available for many different mobility products and services, it will deliver enhanced performance and durability at an affordable price in a lighter architecture with enhanced energy density. With its next-generation fuel cell system, the group aims to offer a highly efficient and diversified lineup of hydrogen-powered vehicles.”

While fuel-cell powertrains haven’t caught on in the consumer passenger vehicle market, there may be potential in them as a long-term solution for trucking. Hyundai’s own Xcient fuel-cell semi is one example, and other companies (including Toyota, Daimler and Volvo) are betting on the technology too. 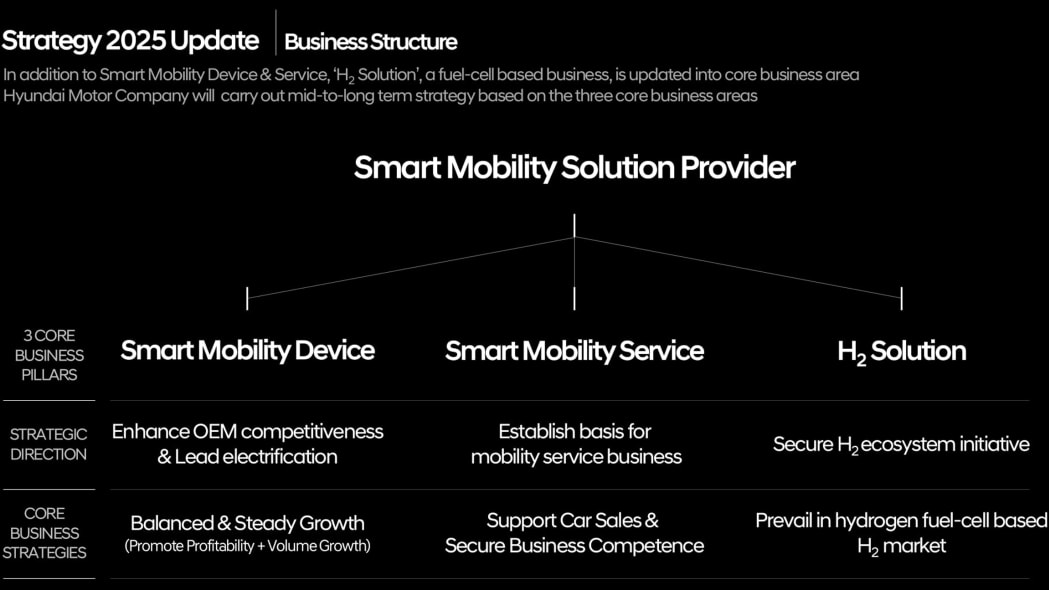 A new sub-brand for alternative-fuel vehicles such as hydrogen fuel cells also makes sense since Hyundai’s announcement that it would have an EV-only brand in the form of Ioniq. Over the next four years, Hyundai plans to launch the Ioniq 5, Ioniq 6 and Ioniq 7. Odd-numbered models will always be crossovers or SUVs, and even numbered models will be sedans. The Ioniq models will also make use of Hyundai’s recently revealed modular electric platform called E-GMP.

In other parts of Hyundai’s overall strategy, the company plans to roll out over-the-air software updates starting in 2021, and we expect Hyundai to explore other cloud-based solutions for its commercial offerings. The company is also targeting 2022 for SAE Level 3 semi-autonomous driving assists, with development continuing on potential Level 4 and 5 features. Aerial vehicles are also in development, with a hybrid cargo vehicle aimed at launch in 2026 and a fully electric version in 2028. Investments in all aspects of Hyundai’s long-term strategy will total around $55 billion.

Aston Martin will keep the internal combustion engine beyond 2030