8 electrics that are changing the car industry


The year 2021 will go down as an inflection point in the auto industry’s transition to electric vehicles. It’s when many much-anticipated models became reality. No longer sketches or sketchy prototypes, electric vehicles appeared from all corners with everything from the Lucid Air to Ford Mustang Mach-E changing how we think about transportation. I managed to drive a lot of them, and as I went through my notes, I realized I’ve got a mini memoir of the seminal EVs of 2021. Here’s my take on eight of them.

Easily the most over-the-top EV I tested this year. The 1,000-hp super truck lived up to the hype with its domineering presence, stupendous power and simply being a reincarnated Hummer. I took it for a short spin on- and off-road at the General Motors Proving Grounds in Milford, Mich., and was impressed with the airy cabin, removable sky panels and expansive touchscreens. Yes, I crab walked, which felt like steering a pontoon boat, though I can see why it would be useful.

The most beautiful sedan I tested all year, EV or otherwise. Unlike the futuristic Mercedes EQS — which is quite attractive — Lucid’s car is a blend of mid-century modern interior aesthetics and classic European exterior styling. When I walked up for my test drive, someone who I’m pretty sure was comedian Jon Lovitz was sitting inside and taking it all in. As it sat in the valet of a hotel in a wealthy suburban enclave north of Detroit, the Lucid drew more attention than any of the Mercedes, Cadillacs or Lexus models passing by. The driving experience was enveloping. Starting at $169,000 for the Performance model (reservations are closed), the Lucid I sampled packed 1,111 hp and 471 miles of range. From the precise steering to the comfortable suspension, the dynamics were spot-on. It’s a formidable product, and all the more impressive given it’s Lucid’s first.

The Bolt was the most pleasant surprise for me. It handled well, offered low-to-the-ground hot hatch dynamics and the steering was dialed-in. Adding a crossover variant for the new generation was a smart play. On a summer morning where I went to a first drive of the Ford Bronco at an off-road course, my hour-long commute in the Bolt was an enjoyable appetizer.

The Bolt was also my biggest disappointment due to its extensive recalls for fire risk. Ironically, I had the Bolt in my driveway when the initial recall went out for the previous generation (2017-19). Being slightly compulsive, I moved the car to the street, even though it’s a 2022 model. The next month GM expanded the recall to every Bolt ever made and advised owners to park them outside and away from things. Guess my instincts were right. Now, GM won’t build new Bolts until next year as the fixes are prioritized. This is a black eye. Stuff like this shouldn’t happen. It sunk the first iteration of Fisker, and Toyota and Audi took years to recover from similar recall issues. GM’s own airbag issues dinged its image for much of the 2010s. This isn’t meant to pile on. Rather, it’s highlighting a missed opportunity. The Bolt is an excellent car. Without this recall, GM would already have an affordable electric car with 259 miles of range that’s on sale and normal people can buy.

I drove both the rear-wheel and all-wheel-drive models and I give VW props for creating a mainstream crossover that will appeal to well, crossover buyers. It’s an attractive vehicle with piercing LED headlights and an elegant silhouette. To the uninformed, it might be an EV, or it might not — and that’s how some buyers will want to approach the issue. Offering a range of up to 260 miles, there’s plenty of capability and the RWD model felt sporty to me. I didn’t like the infotainment, which was cumbersome and dense to use. Otherwise, this is the right crossover for a lot of people, electric or otherwise (as I wrote in March). VW should have offered “Voltswagen” as a no-cost badge option for its EVs, which would have been cool for a lot of owners, opposed to playing a deceptive prank. 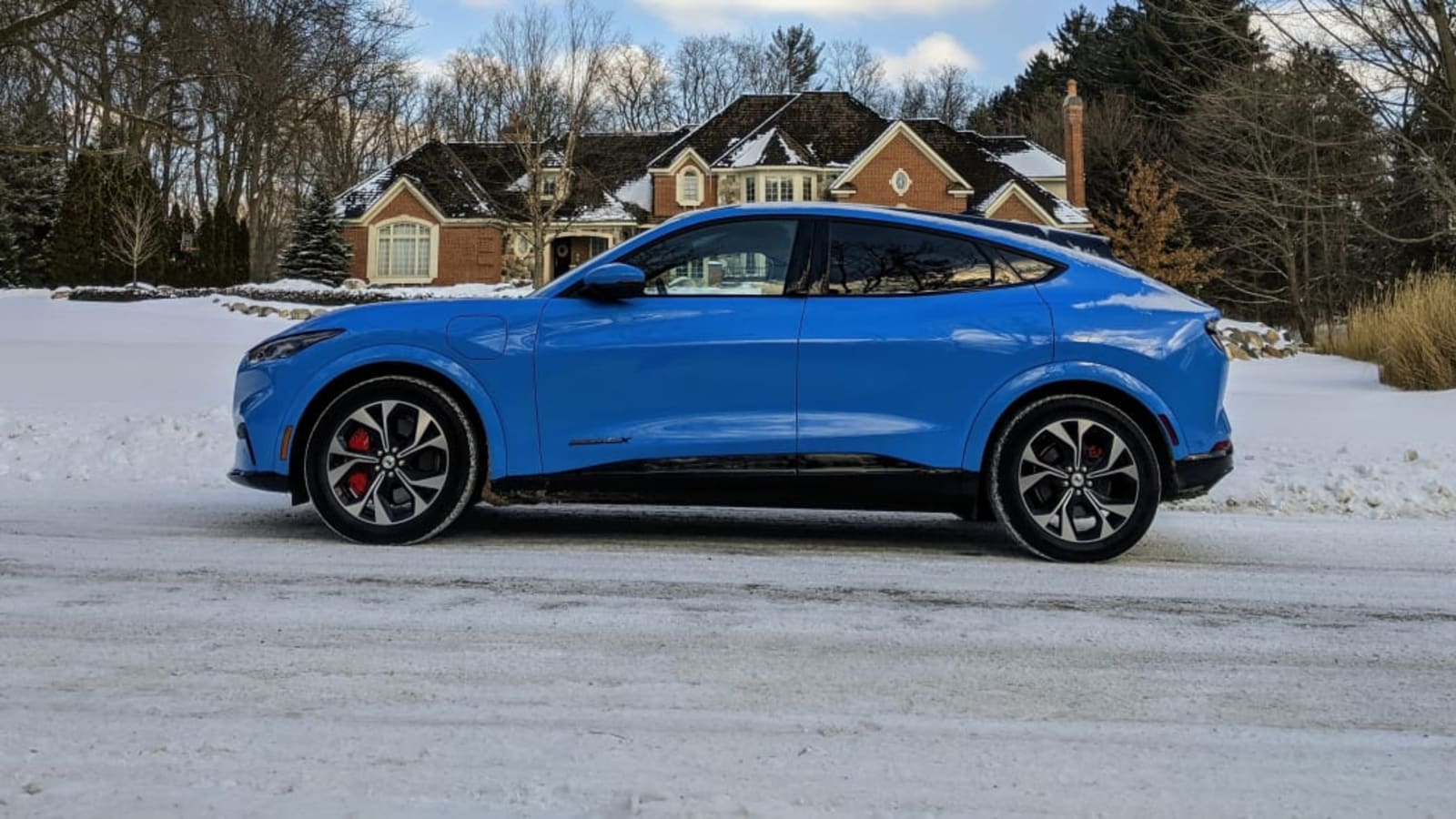 This was the first EV I drove in 2021, over the course of a few frigid February days. Put simply, it lived up to its mission as an electric Mustang. It looks the part — getting as much attention as an Aston Martin DBX I reviewed around the same time — and it’s a lot of fun to drive. I tested a First Edition with 346 hp, a range of 270 miles and a price of $59,400. All seemed reasonable for a premium sports crossover. As the Mach-E lineup has grown this year, Ford is offering more power and more range for more money, though you can also get a more basic entry for about $43K with 230 miles of range. It’s a compelling portfolio. Ford got the little things right with the Mach-E. The infotainment is excellent and using the 15.5-inch touchscreen accomplishes everything from changing the radio to the drive mode. Ford’s only hiccup with the Mach-E was a stop-sale for its Level 2 home chargers earlier this year.

This was the most futuristic car I drove this year, full stop. From head-turning design to the acres of screens inside the cabin, the EQS felt like Transportation 2030. I would have assumed it was electric. Or perhaps solar-powered. Ask a kid to draw their idea of a future car, and it’s the EQS. With the wheels at the corners and mouse-like shape, it’s a dramatic departure from Mercedes’ traditional design elements. Some won’t like that. I loved it. My tester, an EQS 580, started at $119K and had a gorgeous white interior. Somehow, I got it clean after tossing a muddy scooter for my 3-year-old in the cavernous hatch after a fall outing with leaves and mud.

From an EV perspective, it’s a big car that feels fast. This model offers 516 hp and can hit 60 mph in 4.1 seconds, which is blinding quick for something this size. The augmented reality heads-up display worked well for me when I was in an unfamiliar neighborhood, and the elaborate and colorful screens were surprisingly intuitive. Considering all of this, the 2022 EQS feels like a preview of the 2030 S-Class, when many of these elements will become commonplace on luxury cars.

The R1T is a compelling truck with a range of competitors, including the expensive Hummer and the more proletarian Ford F-150 Lightning. Pondering all of this, I couldn’t help but feel Rivian has created a niche for itself as I pushed the R1T through the back roads of Michigan west of Ann Arbor. It’s a clever design, with interesting cues like the horizontal headlights and pass-through areas behind the cabin, which would be good for storing long objects like tent stakes. The thumb controls located in the steering wheel aren’t my flavor of brandy, but otherwise the clear and logical infotainment system was solid. I tried the drive assist feature on a busy Wednesday morning on Interstate 94 and was reasonably satisfied, though I’d need more time to gain confidence. With a quad motor setup producing 800+ hp and up to 314 miles of range, the R1T has all of the bonafides. I was impressed, and also left with the impression that Tesla needs to hurry up with the Cybertruck. There’s a lot of good electric trucks already here.

I spent probably the least amount of time in the Ioniq 5, as it was more of a preview quick spin, but its edgy styling and 300-mile range look solid. The interior is simple and uncluttered, reminding me a bit of VW’s approach with the ID.4. The Ioniq 5 kicks off Hyundai’s new generation of electrics, and they look promising.

Watch my test drive of the GMC Hummer:

Assembly of various bimmers in Dingolfing

Even though final power and torque numbers aren't out yet, the 2022 Ford Bronco Raptor does have a base...

Alfa Romeo Tonale will finally be revealed in February

Following a couple of delays, the Alfa Romeo Tonale compact SUV will finally, officially be shown to the public....

Aston Martin is slowly taking the wraps off of a more powerful evolution of the DBX. Possibly assigned the...

To flush or not to flush…

To flush or not to flush... Ok, so I had a leaky rocker cover gasket...i've now replaced...

7 Technology and Connectivity Predictions for 2022 - Operations

Malaysia sales down 5% in December