New Peugeot 408 : A new breed of Peugeot, a dynamic fastback, unexpected from every angle

The new Peugeot 408 is unexpected because it is different. It is the first of its kind, both in the history of the Brand itself and in the car market as a whole

The new Peugeot 408 is unexpected because it is different. It is the first of its kind, both in the history of the Brand itself and in the car market as a whole. With the new 408, Peugeot demonstrates the creativity of its teams by offering a new fastback silhouette at the top of the C segment. This new age Peugeot offers a feline stance and unique allure, engineering excellence focused on efficiency and intelligent electrification, as well as the emotions provided by cutting-edge technologies dedicated to driving pleasure and instinctive use. 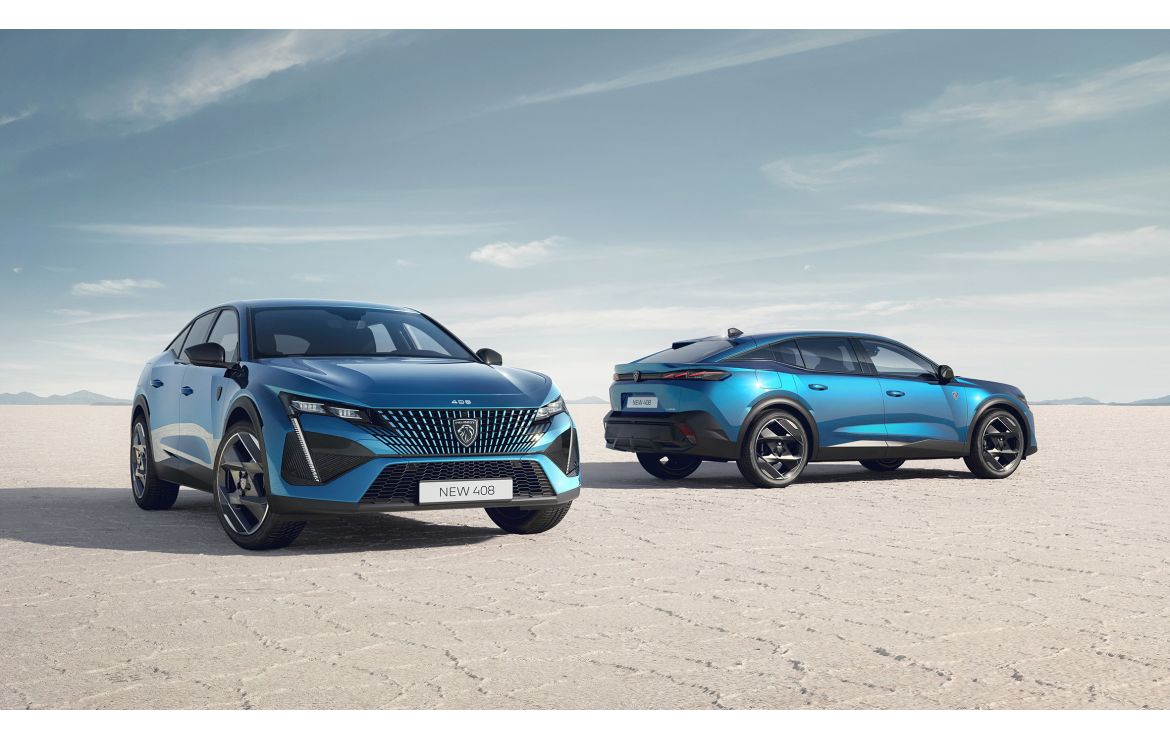 ALLURE. The Peugeot 408 stands out first and foremost for its dynamic fastback silhouette and its unmistakable style, but also for the extent to which it breaks the mould. Its feline stance is typical of the Brand’s models. Its lines are sharp, the grille is the same colour as the bodywork to blend in perfectly with the front end, and it proudly boasts the new Peugeot emblem with the head of a lion. The inverted cut-out of the rear bumper is unexpected, while giving the profile a strong look. The new Peugeot 408 sits solidly on 720mm diameter wheels and the iconic 20-inch rims feature a disruptive geometric design. At the front, the fang-shaped light signature perfectly integrates the 408 into the Peugeot family, as do the three-claw LED lights at the rear.

With a length of 4.69m, based on a long wheelbase of 2.79m, the new Peugeot 408 has a remarkably spacious second row, with 188mm of legroom. The boot is also generously sized, with a volume of 536 litres, which can be increased to 1.611 litres once the rear seats are folded down. The new Peugeot 408 is 1.48m high with a slim and sleek silhouette. This improves aerodynamic efficiency

EMOTION. For both its driver and its passengers, the Peugeot 408 offers the latest generation of the Peugeot i-Cockpit®, instantly recognisable by its compact steering wheel dedicated to driving pleasure and controlled agility.

In the cockpit, the emphasis is on quality and connectivity, with the very latest technologies to make the driving and travelling experience more intuitive and rewarding.

EXCELLENCE.  Powered by 6 cameras and 9 radars, the driver assistance systems provide peace of mind and safety. They include:

The range of engines powering the Peugeot 408 includes two rechargeable hybrid versions with 180 and 225bhp, and a 130bhp petrol version. All three are paired with an 8-speed EAT8 automatic gearbox. An all-electric version will follow a few months later.

Efficiency was a key concern for the designers of the Peugeot 408, since the combination of efforts in terms of aerodynamics, weight reduction (from 1396kg) and low-emission engines means that the vehicle can now boast remarkably low average energy consumptions (under homologation), both for the hybrids as well as for the 130bhp petrol version.

The new Peugeot 408 will arrive on the market at the very beginning of 2023. A car with a global ambition, it will be produced at first in Mulhouse, France, for the European market and then, soon afterwards, in the Chengdu factory in China for the local market.

“At Peugeot, we believe that life is better with allure. With its unique look, innovative fastback silhouette and unbridled elegance, the new 408 is the perfect expression of the Peugeot Brand’s philosophy and inventiveness,” says Linda Jackson, CEO of the Peugeot Brand. “Unexpected from every angle, the new Peugeot 408 has been designed for lovers of cars and of life, who want to break free from the traditional while seeking responsible pleasure. It embodies Peugeot’s exacting technological standards – controlled efficiency and a very high-level digital experience – as well as the intense emotions of instinctive driving pleasure”.