Three years after its successful India debut, the Venue gets a mid-life makeover and new features.

Having moved over three lakh units since its launch in 2019, the Hyundai Venue is a strong player in the compact SUV space, and contributes 22 percent to Hyundai’s overall sales, making it an important offering for the Korean carmaker. Interestingly, “First time buyers now constitute 36 percent of Venue’s sales, so, very clearly, first time buyers are moving away from hatchbacks and towards compact SUVs,” says Tarun Garg, director of Sales, Marketing and Service, Hyundai Motor India. Thus, the Venue now gets a mid-life makeover and some new features aimed, as the company says, at ‘young first time buyers’.

One of the Hyundai Venue’s talking points is its new ‘parametric’ front grille. It’s an oversized, rectangular unit featuring a block-like pattern and is finished in dark chrome with a tinge of golden-bronze. It’s certainly flashy and would appeal to a younger set. 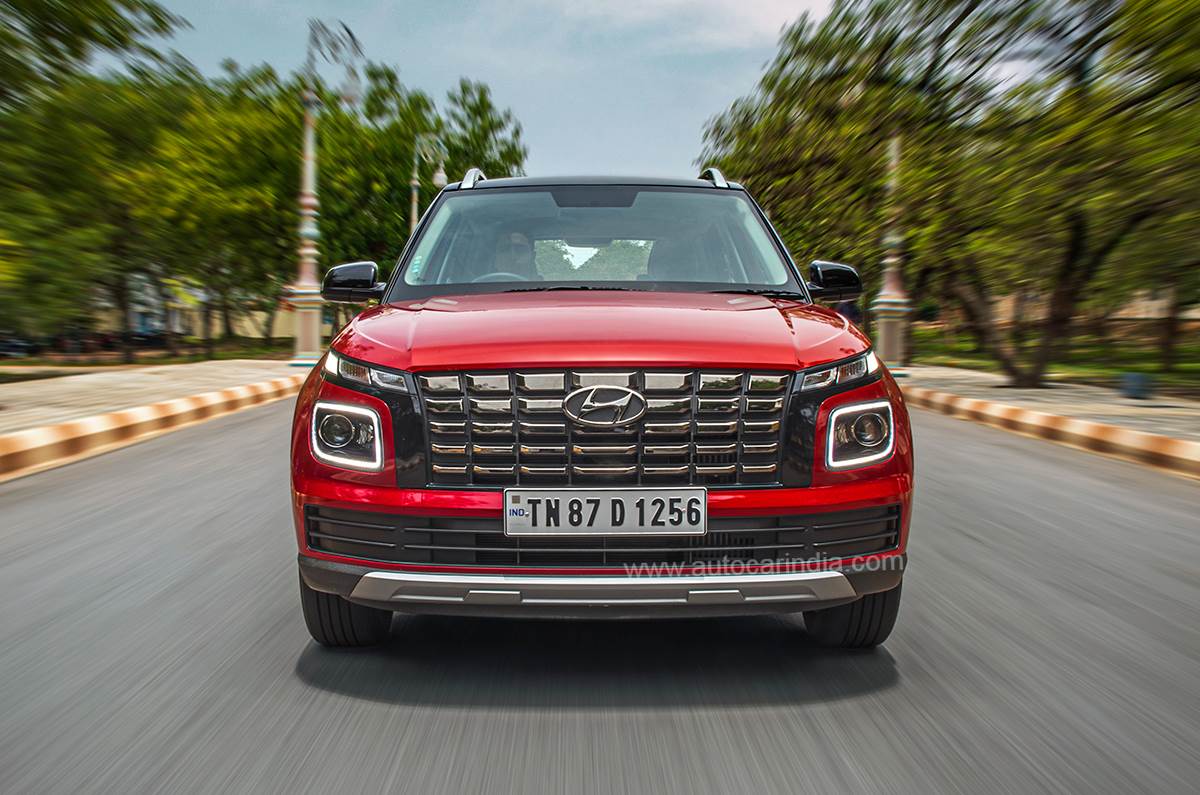 Oversized grille features a block-like pattern, finished in dark chrome with a tinge of golden-bronze.

LEDs now replace the halogen projector headlamps, but the split headlamp and indicator set-up have been carried over from the pre-facelift version. Oddly though, fog lamps have been dropped across the range. 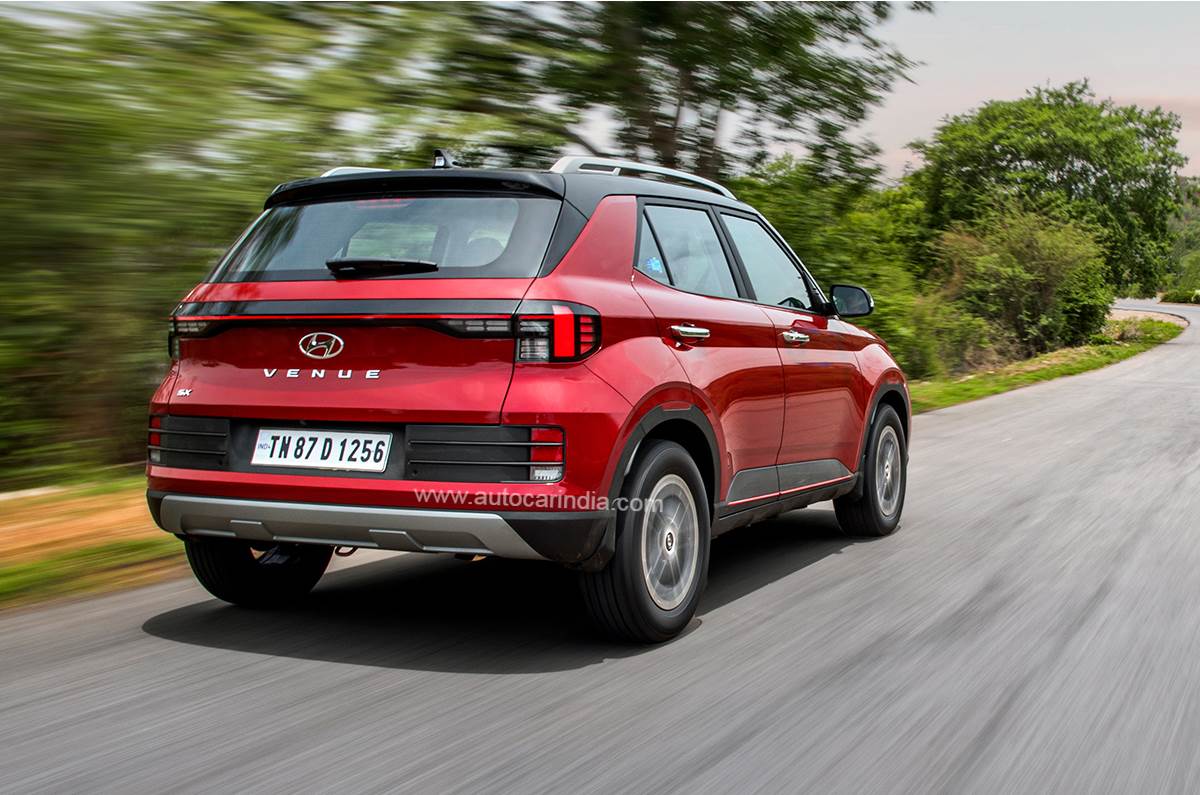 New LED tail lamps with a light bar running across the car’s width link ties with international Hyundai models like the Ioniq 5.

The bumpers at the front and rear are redesigned with faux silver skid plates, which feature horizontal black elements to help accentuate the car’s width. The most prominent design change is the rear tail-lamp, which features a new LED light bar running the width of the car that brings it in line with international Hyundai models like the Ioniq 5. Even the 16-inch alloys sport a new design. 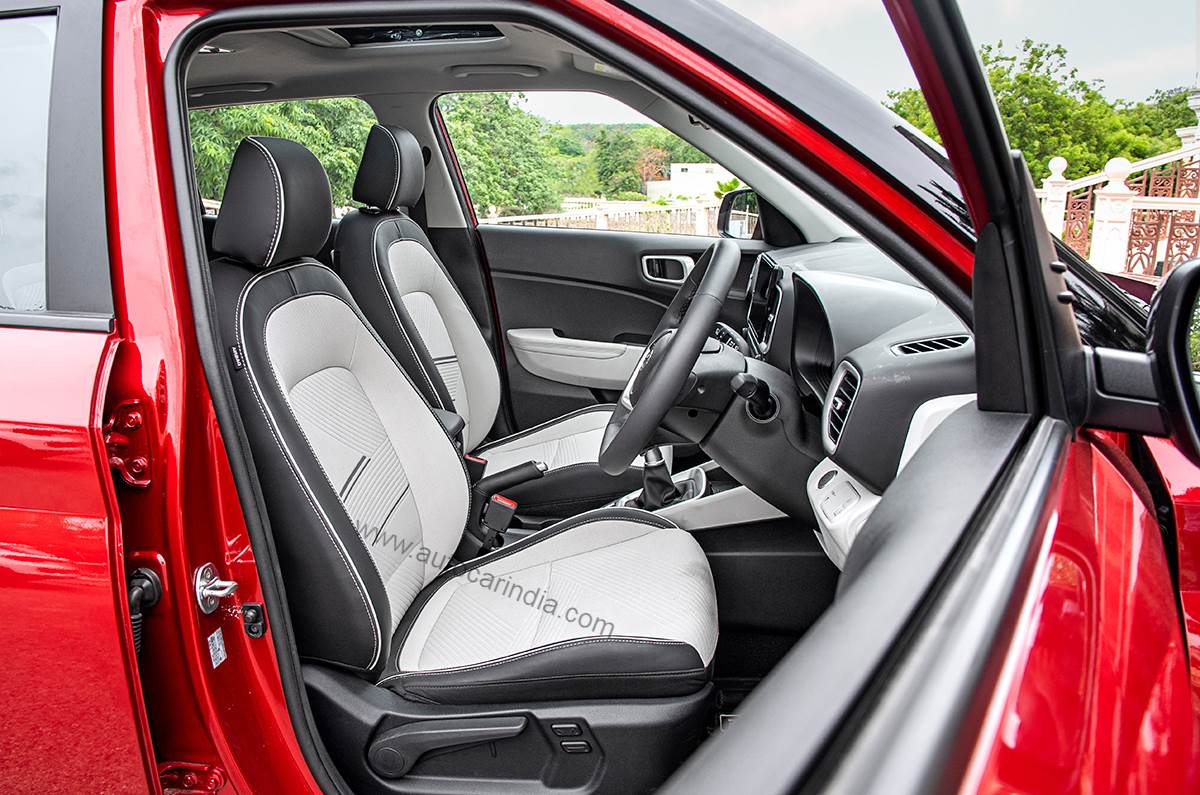 Hyundai’s new ‘greige’ theme – a combination of beige and grey – makes the cabin feel brighter compared to the all-black interiors of the outgoing version. The driver’s seat now gets electric fore-aft and recline adjustment, and the part-leatherette seats are quite a comfy place to be. However, these miss the ventilation function which rivals like the Nexon and Sonet offer. On the topic of comfort, an area where the Venue fell short was rear seat space. However, with the update, Hyundai has scooped out the front seats, increased the length of the rear seat squab and added a two-step recline for the backrest. So, rear seat comfort has improved over the outgoing version – although there is no change in its wheelbase – and with ample foot room, the overall sense of space has been enhanced. Owing to its narrow width, however, three adults abreast at the rear will be a bit of a squeeze. 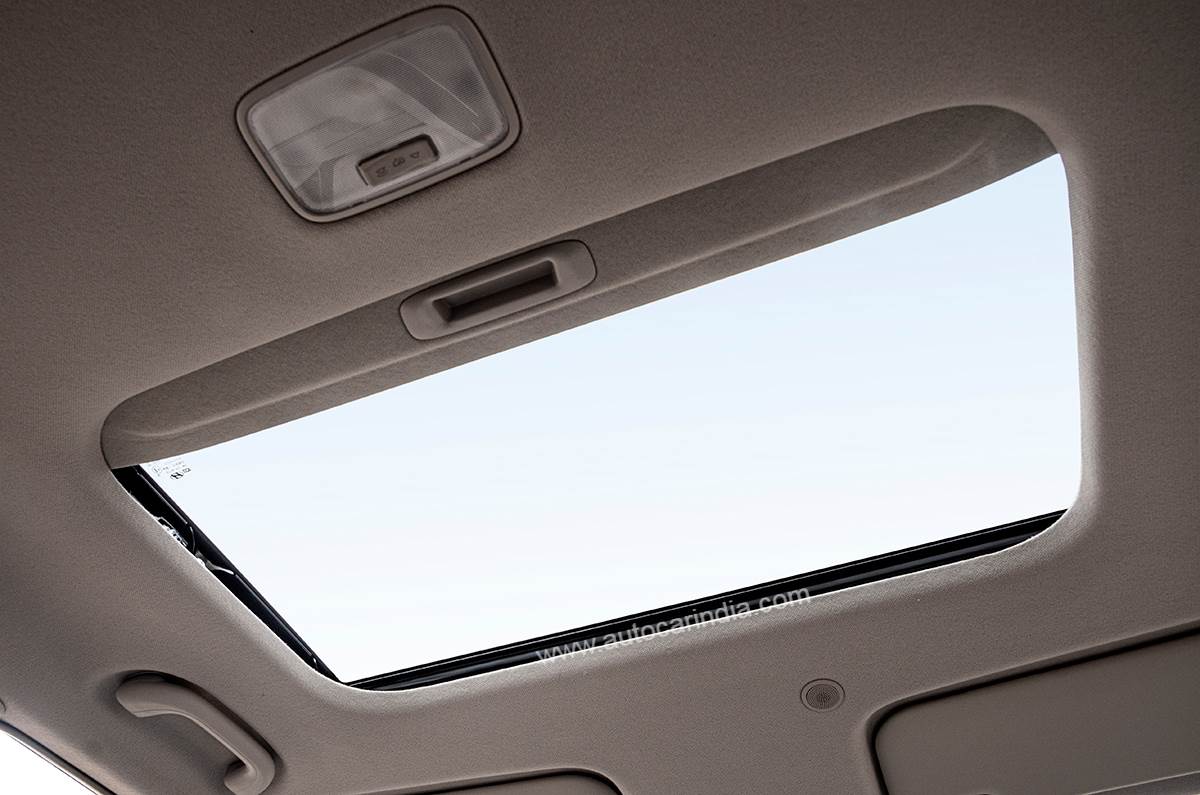 Hyundai says that the sunroof is a huge draw for Venue buyers. 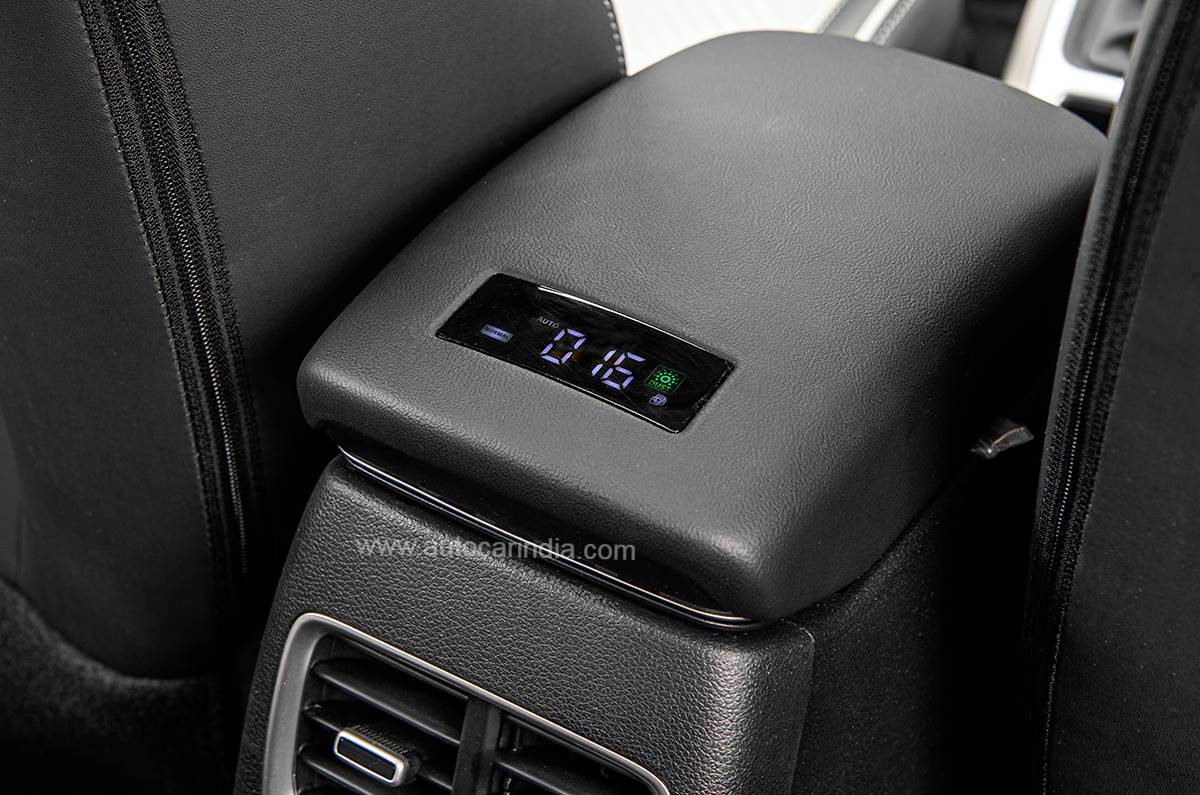 Air purifier is now embedded in the front armrest.

It also features new ambient sounds – forest, by the beach, in a cafe – that play via the vehicle’s speakers, which might seem like a cool party trick, but is gimmicky to use otherwise. Other features include Android Auto, Apple CarPlay, paddle shifters (for DCT), wireless charger, tyre pressure monitor, six airbags, ESP and sunroof among others.

The entry-level 83hp, 1.2-litre petrol engine accounts for around half of Venue sales, while the 100hp, 1.5-litre diesel and 120hp, 1.0-litre turbo-petrol account for about thirty and twenty percent, respectively. In this review, we sample the diesel and turbo-petrol. 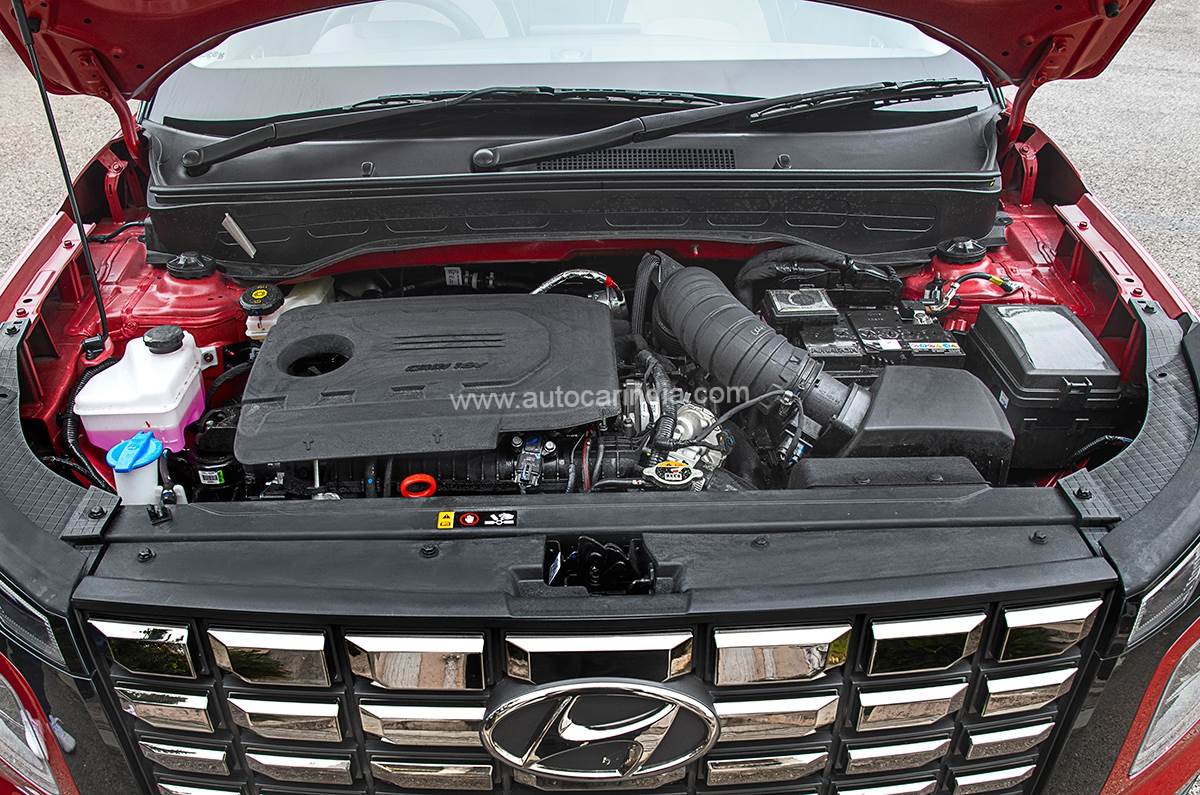 The Venue shares its diesel with the Verna, Creta and Alcazar, however, unlike its larger siblings, it uses a less-expensive wastegate turbocharger. This means it makes 100hp and 240Nm – 15hp and 10Nm lesser than its stable mates, which get a variable geometry turbo. What’s nice is that this engine is smooth and refined at idle and city speeds, and with power delivery concentrated lower down the rev range, the light clutch and buttery-smooth 6-speed gearbox make commuting a breeze. It tends to rattle under load and feels strained at higher revs, and, as the engine loses steam by 3,300rpm, it is best to keep the revs low and work around its narrow power band to make quick progress.

The three-cylinder turbo-petrol on the other hand has a healthier, broader spread of torque. Spin it beyond 2,000rpm and it pulls strongly and makes for an enjoyable drive experience. It is quite refined at idle and on the move, and sounds a bit thrummy only when you spin it faster. The 6-speed manual has been dropped from the range, so this engine is now paired to either a 6-speed iMT – intelligent manual transmission – or a 7-speed dual-clutch automatic (DCT). 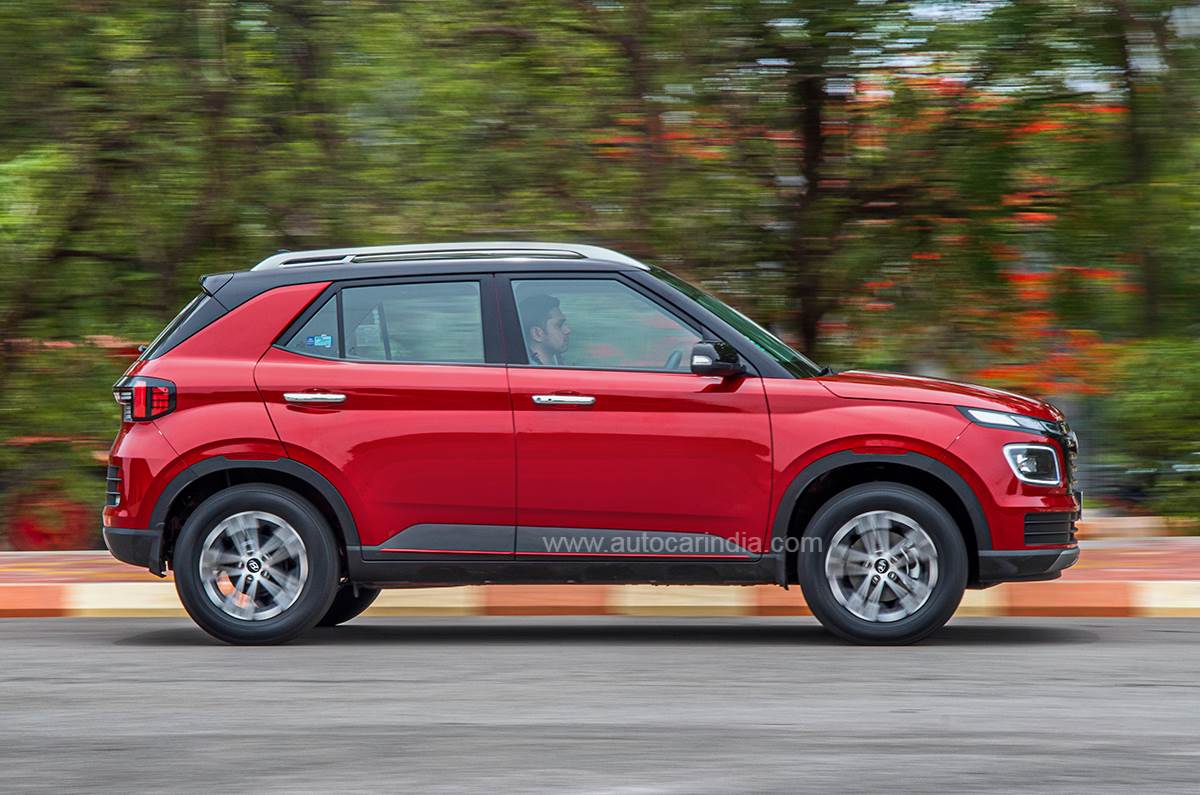 It still remains a smooth, refined and easy to drive compact SUV.

While fans of the manual gearbox will loathe that there is no true manual – the iMT is essentially a manual minus the clutch pedal which made its debut in 2020 – this set-up is easy to get accustomed to and lets users row through the gears effortlessly, without them having to depress or modulate the clutch pedal. The iMT is fine for everyday use, however, during spirited driving, it’s not very quick to shift through the ratios as you have to wait for the automated system to work the clutch.

The second-gen 7-speed DCT, like the outgoing version, is smooth shifting, has closely stacked gear ratios, and is a brisk performer. Even though downshifts occasionally take a while to execute, the inclusion of paddle shifters allows drivers to take manual control over the transmission. These are a joy to use, particularly when driving in a spirited manner. The DCT now packs in drive modes, which alters the responsiveness and shift points – Eco being the most frugal, Sport being the most fun and Normal being the mid setting. 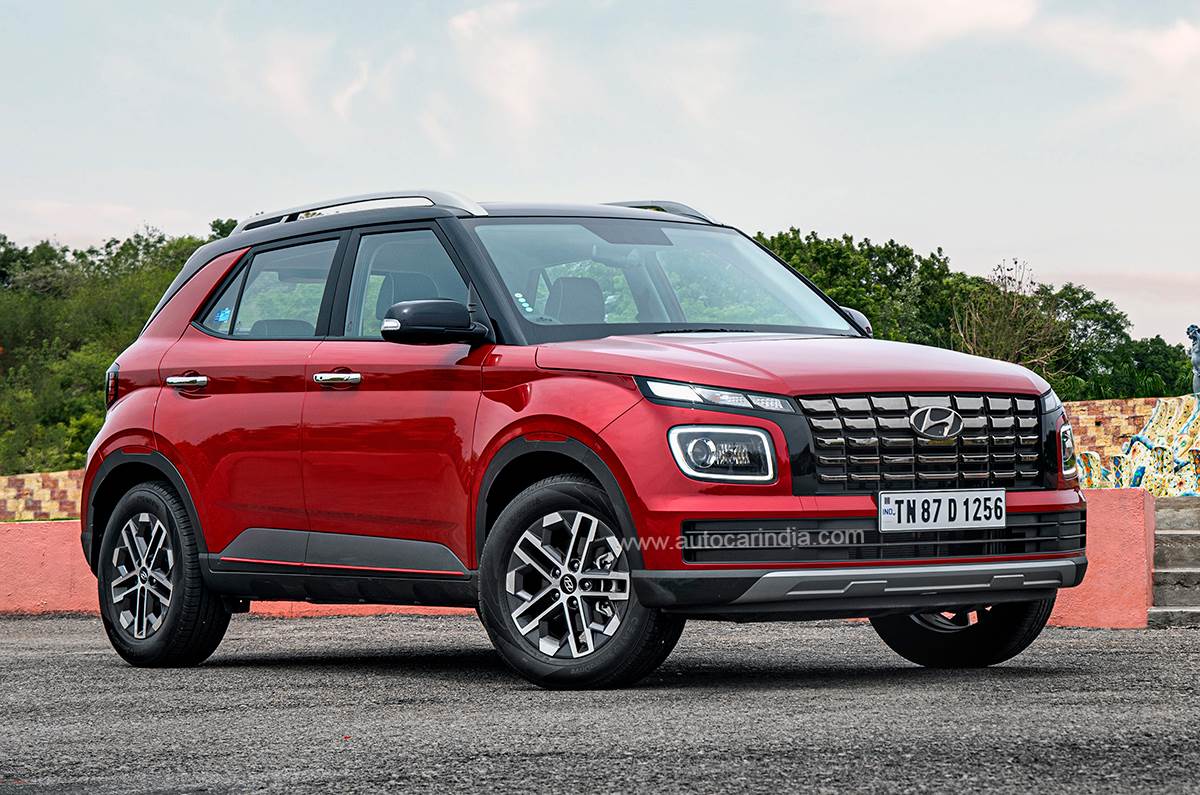 The Venue’s suspension has an underlying firmness, and while the wide 215mm tyres do a decent job of absorbing road shocks from tinier potholes, the suspension sends through most of the larger imperfections on the road, leading to a rather busy ride. Sharper bumps lead to more prominent road shocks inside the cabin, and the Hyundai doesn’t feel as plush as some of its rivals.

The Hyundai Venue is a jack of all trades. Spread across a wide price band ranging between Rs 7.53 lakh-12.57 lakh, and offered with multiple engine and transmission options, the Venue caters to a broad set of buyers. Like the outgoing version, it is still very user-friendly; the engines are smooth and refined; controls are light and ergonomics are spot on. 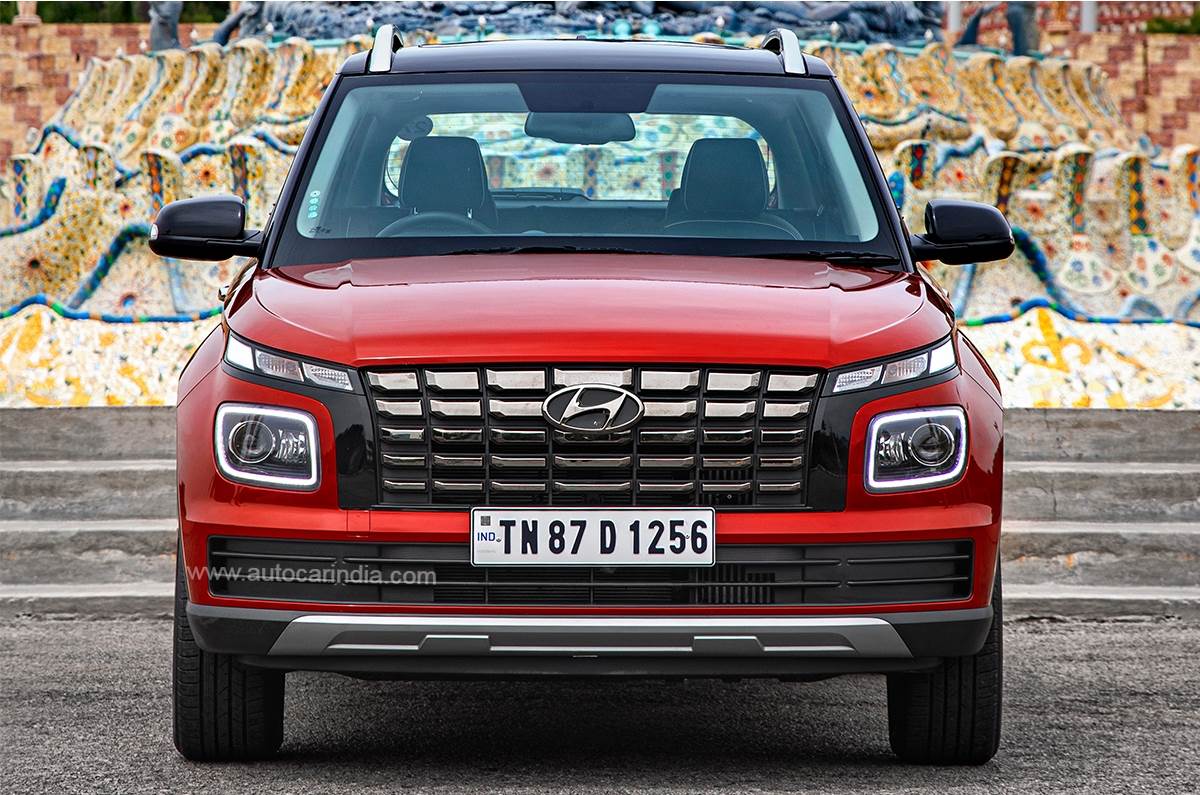 Hyundai has even addressed rear passenger comfort to an extent. It’s also feature-loaded, although the inclusion of ventilated front seats and a 360-degree camera would have completed the package. The Venue might not be the toughest, the most spacious or the comfiest compact SUV, but it does reasonably well in most areas, and that makes it a formidable contender in its space.