It’s a well-established fact that the Mercedes-Benz E-class offers the best rear-seat experience this side of Rs 1 crore. Deservedly so, the long-wheelbase V213 model is the default choice for India’s luxury-car buying elite. But what if I were to tell you there’s a Toyota that could challenge the Merc in its area of excellence? Ahem, a Toyota MPV, to be more precise. Bear with me here. Right since the day I sunk into the Toyota Vellfire’s brilliant middle-row lounge seats earlier this year, there’s been this burning question at the back of my head – “Could it take on a ‘traditional’ luxury car?” The concept is quite out there, yes, but I just had to know. And here we are. 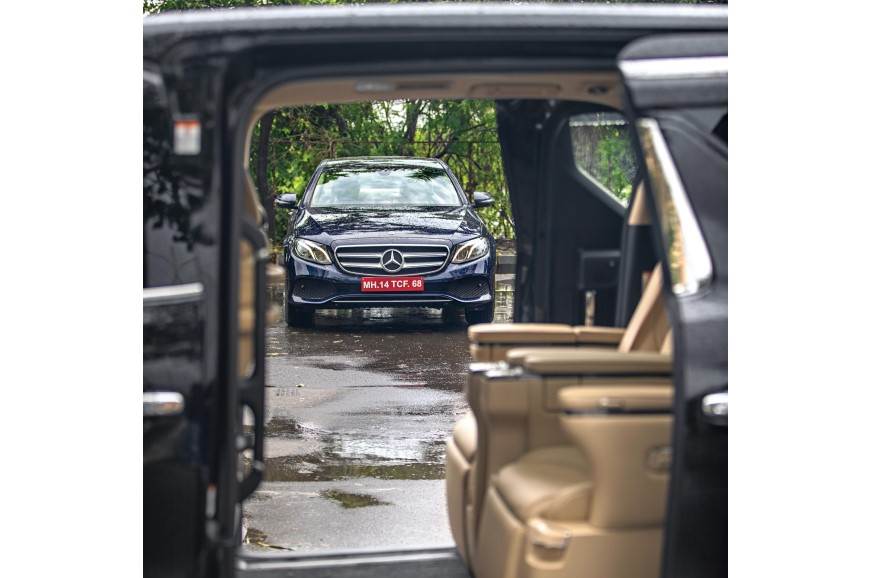 Who’d have thought an MPV could be an alternative to a luxury sedan?

This is not an apples-to-apples comparison (heck, when did we ever bring a sedan and an MPV together?) and some aspects will be glossed-over, entirely. Due weightage, however, will be given to the experience at the back, the raison d’être for this piece.

I’ll be sampling the E-class first. And just as it pulls into the office lobby for our simulation of ‘a day in the life of India’s rich’, I momentarily lose the objectivity with which I promised to judge this contest. There’s something very regal about the E-class; and really, few things say you’ve arrived in life better than a sedan with the three-pointed star on the grille. The interior scores just as high on sense of occasion, the first glimpse of which I get when the building’s valet opens the rear door for me. Like every other sedan, getting in requires lowering yourself into the cabin, but the E’s large rear doors make ingress easy enough. The soft-close mechanism on door-shut is a detail that isn’t lost on me, either. 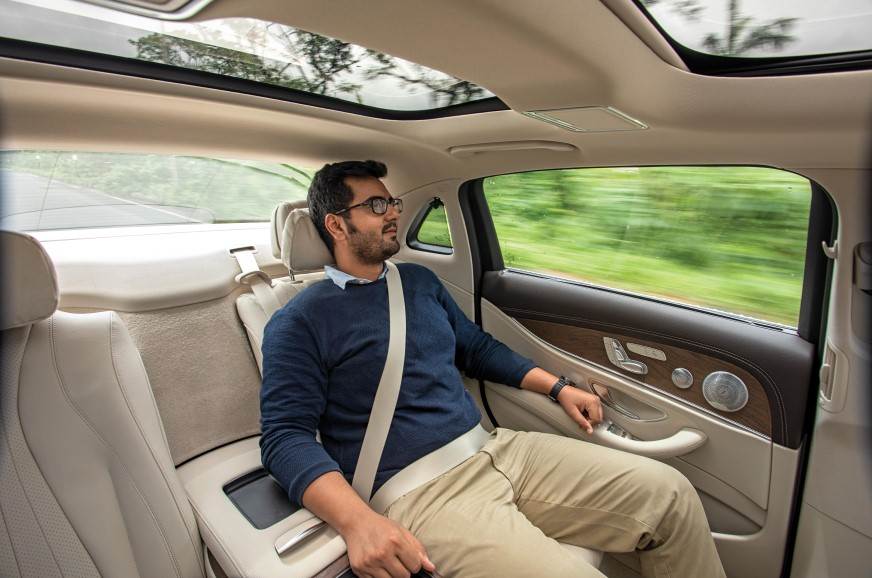 The seats, the space and the calm make E-class’ cabin a special place to be in.

The first few moments in the E-class are just spent revelling at what can only be described as a properly opulent cabin. There’s an all-encompassing richness to everything inside and the superb attention to detail is evident on everything, from the unlacquered wood to the window buttons. The cream carpets and Artico leather upholstery will be a nightmare to keep clean, I’m sure, but that is for the chauffeur to worry about. My job is to sit back and relax. And in an E-class, sit back and relax you will. The well-judged seat cushioning is just one part of the story – on the rear door is a pictogram of a seat, like the ones you’d find up front, that lets you electrically adjust your perch to your liking. The backrest is reclinable by 37 degrees and even the headrests with their sleep-inducing pillows are powered. And that’s not all that the buttons do. You can also use them to slide the front passenger seat forward to create more legroom for yourself. By ‘more’, I mean even more. With its three-metre-plus wheelbase, the E-class is incredibly roomy, even with the front seat in its stock setting. Moving the front passenger seat forward pushes rear legroom well into limousine territory. 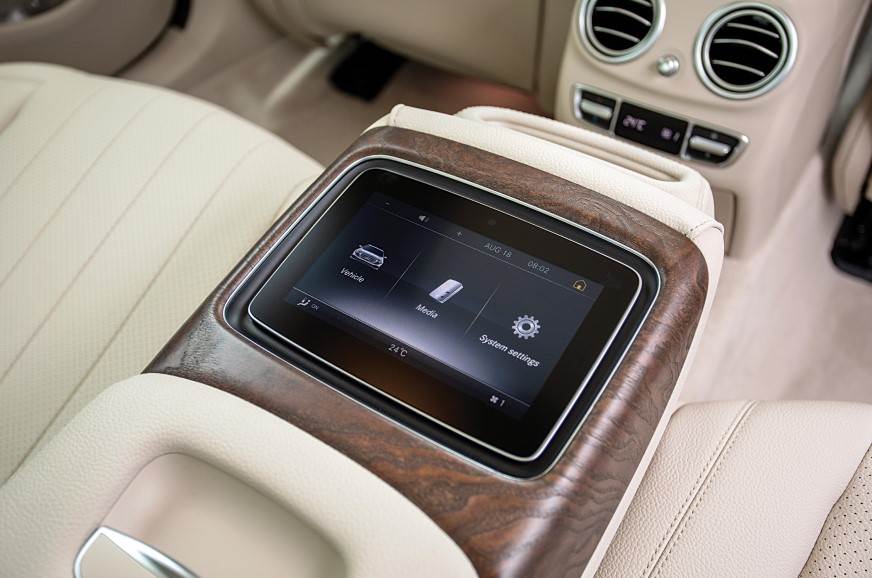 Seatback reclined, front seat moved into the distance and gigantic centre armrest flipped down, I’m good to go. This happens to be my first time in the BS6-compliant 2.0 diesel-powered E-class and one of the takeaways is how quiet the engine is. There’s little boom or rumble from the engine and even suspension and road noise are so well contained, I feel cocooned from the world outside. No less impressive is the ride quality. The E 220d’s steel springs soften the blow of the worst of Mumbai’s carpet-bombed roads and even on the faster, smoother stretches, the Merc remains composed and fairly flat. And to think this isn’t even the range-topping E 350d that gets air suspension and of course a new 3.0 straight-six diesel engine. 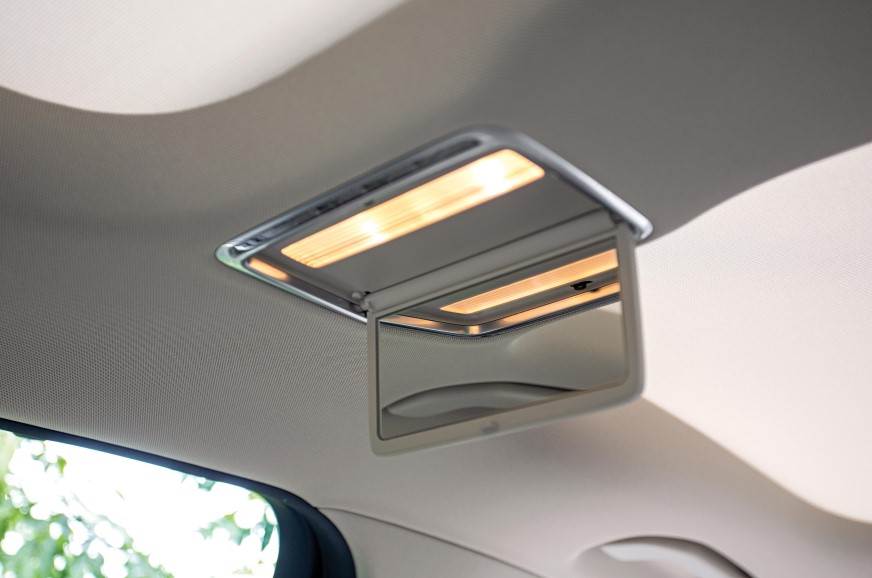 Vanity mirrors are a handy inclusion.

It’s easy to zone out in the E-class’ serene cabin, but if listening to music is your way to unwind, the Merc also delivers with well-defined sound from its Burmester system. You can control the audio functions via a touchscreen at the back, which also doubles as your go-to control for the sun screens, dual sunroofs, 64-colour ambient lighting and climate control functions. Mercedes has also packed-in wireless charging and a pair of vanity mirrors, ensuring your phone and you will be set for long days at the office or that celebratory party, as the case may be. I will, however, reserve comment on the efficacy of the three-zone air-conditioning system. I haven’t felt the need to set cooling to Lo on this wet monsoon morning, but the E-class is known to take its time to cool the rear section of the cabin. Time to switch to the Vellfire.

Don’t judge a book by its cover and don’t judge an MPV by its appearance. All I’ll tell you is that the Mount Fuji-tall Vellfire looks massive (even if overall length is less than an E-class’) and has enough chrome details outside to warrant wearing sunglasses in its vicinity. But let’s fast-forward to the inside story.

A Vellfire will require your valet to think of novel ways to earn your appreciation because there’s no door to hold open for you. The powered sliding rear doors can be operated by external buttons, though your chauffeur will likely do the needful in advance via dedicated door controls up front. It’s a bit of a climb into the Vellfire’s relatively high-set cabin but Toyota has integrated a step in the floor and also provided grab handles on the B-pillar and front seatback to ease the journey in. The trek is worth it, because I find myself having stepped into a different world. There’s a corridor of space between the front- and middle-row seats, the windows are as large as those on a Shatabdi and then there’s those La-Z-Boy-like lounge chairs, masquerading as captain seats. It’s like a living room on wheels in here. 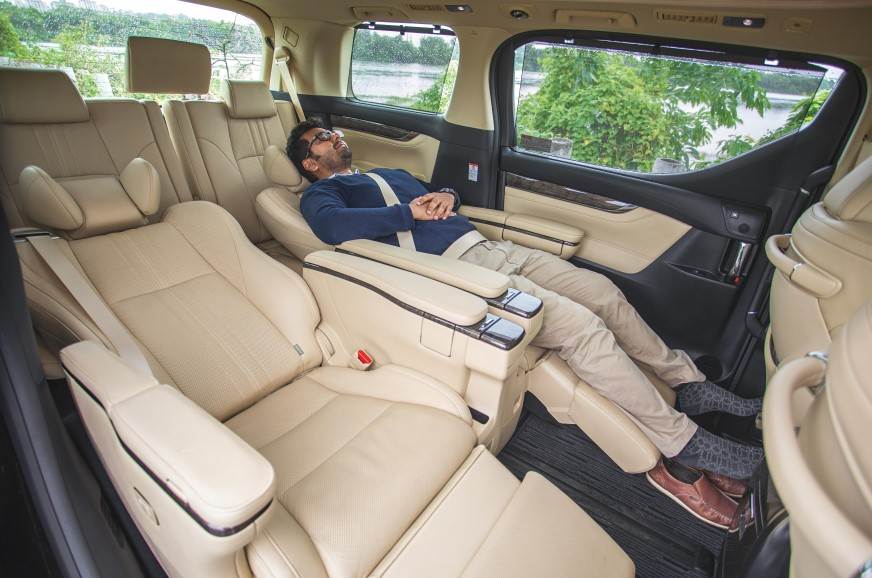 If there’s one reason to buy the Vellfire, it’s that back seat. At full extension, you get a near-flat bed!

Not to sound like a late-night teleshopping salesperson – but wait, there’s more! Because said living room can be transformed into a bedroom. A console on the armrest is your control centre for seat settings, and of particular interest are the powered backrest and leg-rest adjustments. At full extension, you get a near-flat bed! Think first-class on a plane, and you’ll get the idea. All that’s missing is a flight attendant to bring you your caviar. 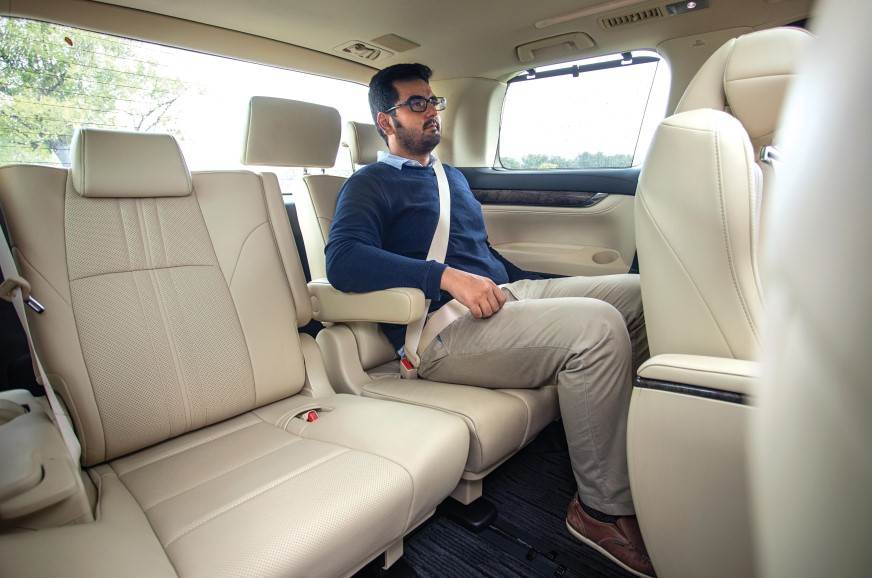 Vellfire’s third-row seats are arguably the best in the business.

Of the other things, the seats also get heating and cooling, there are small fold-out trays for when you need to grab a quick snack between meetings and the Toyota also goes one-up on the Merc with a standard-fit roof-mounted 13.0-inch screen that can stream content directly from your phone. There’s no touchscreen control for other functions as you get in the Merc, so you’ll have to stretch to the roof to adjust the rear sunroof, aircon and 16-colour ambient light-bar settings. The thing is, for all its features and creature comforts, the Vellfire’s cabin just doesn’t feel lavish in the way the Merc’s does. The faux-wood veneer looks straight out of the 80s, the entertainment system’s remote control could be from a budget TV, and even the carpets have a very aftermarket feel about them. Even whatever you can see of the dashboard from the back suggests a functional driver environment, but no more. 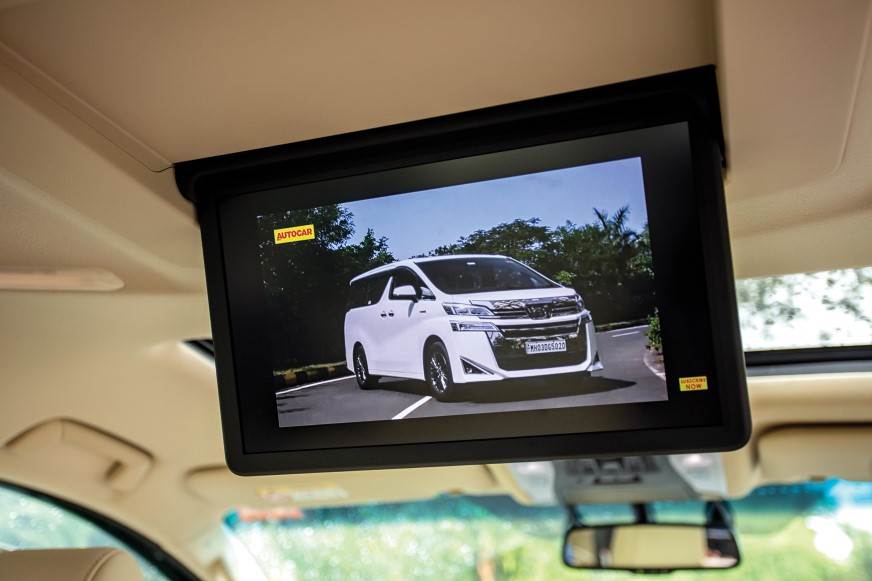 It’s on the move that some of the other chinks in the Vellfire’s armour come to the fore. The ride, for one, is noticeably stiffer than the E’s. The Toyota can’t smother imperfections as well as the Merc can, and on the same roads, I find myself move around more in the Vellfire. The Toyota also picks up more road noise and there’s more buzz from the engine bay under acceleration. It’s not loud, per se, but when you’re talking luxury cars, each decibel matters. On the plus side, the Vellfire’s strong hybrid powertrain (the rear wheels are driven by a dedicated electric motor) includes a pure-EV mode, useable over short distances only, which entirely mutes the din from the 2.5-litre petrol engine. Ironically, the Vellfire’s green quotient is something Toyota wants to make big noise about. 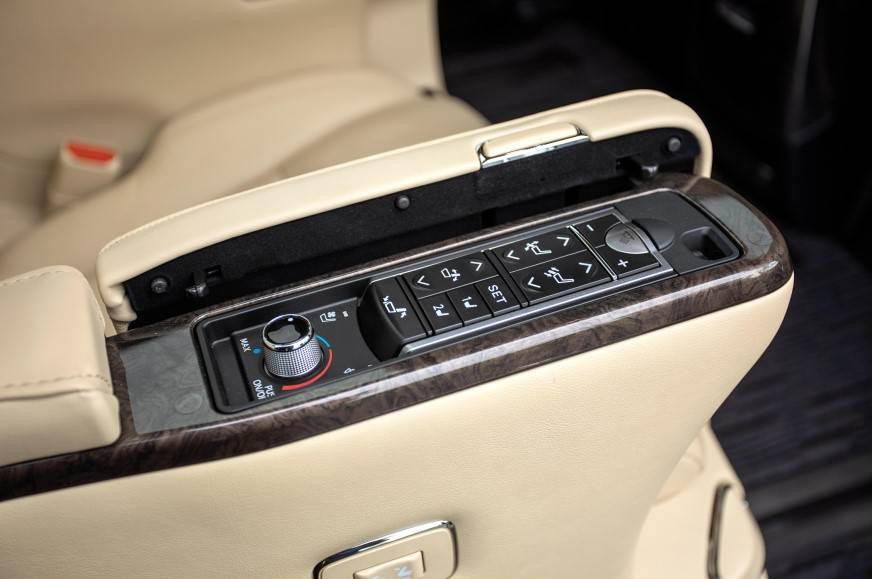 Console in armrest is for seat functions.

On the chauffeur’s day off, you’ll find yourself approaching these two vehicles very differently. The E-class is the model you’d gladly take the wheel of. It’s just as soothing to drive as it is to be driven in; and while it’s no sportscar, you’ll like the Merc for its smooth steering and pleasant 194hp diesel engine. Be warned, however, because after long spells away from the driver’s seat you will have to reacquaint yourself with the E’s sheer size. It’s a long, long car, so it’s best to pre-plan and choose a route devoid of tight U-turns. The massive wheelbase making contact with large speed breakers is also something that’ll be on the back of your mind, though belly scrapes are more of an issue on the air-sprung E-class.

The Vellfire will unlikely be anyone’s first pick for a Sunday drive. Now, while you’d expect it to be cumbersome to drive given that it’s as large as an island, the Toyota is actually quite friendly from behind the wheel. You sit high up, the large glass area gives a panoramic view out and what makes life easier still is that the steering is easy to twirl. Manoeuvrability is surprisingly good and the 360-degree camera is immensely helpful when it’s time to park. Performance from the hybrid powertrain is also adequate for what is a large MPV.

And not to make this into a sedan vs MPV contest but when you want to make an outing with the entire pack, the Vellfire has the natural advantage, courtesy its third row of seats. The last row is world beating but that’s something to compare and contrast some other day. As for luggage space, you know the answer, right?

After a day spent with this duo, I’ve got the answer to the|question that’s pestered me for so long. The Vellfire is the model with the comfier back seat but all things considered, it’s the E-class that better captures the essence of what a luxury car should be. The look and feel of things are all too important when you’re spending big and the Merc makes you feel special in a way that the Vellfire doesn’t – brilliant seats notwithstanding.

What also tips the scales heavily in favour of the Merc is price. Yes, you read that right. This Mercedes E 220d Exclusive comes in at Rs 64.3 lakh (ex-showroom, Delhi) which is a full Rs 19 lakh less than the Vellfire! You could even get yourself the fully-loaded E 350d and still have Rs 8.5 lakh to spare.

The backside might say Toyota. The head and heart say Mercedes.